I’ve heard from countless people over the years who found something close to what they were looking for in their fifties, sixties and even seventies. 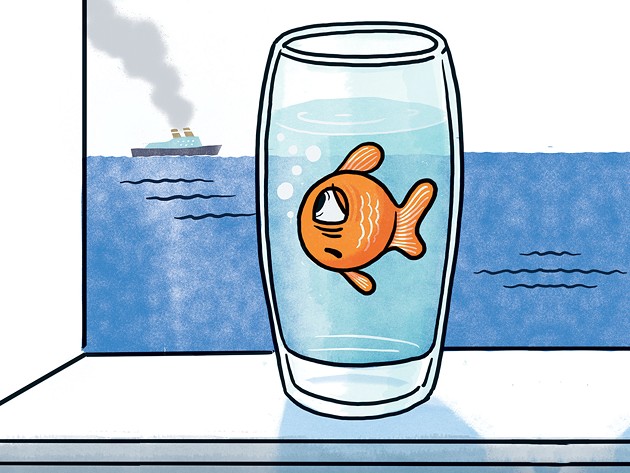 Joe Newton
Finding a romantic partner is never the solution to our problems—it’s only the start of a whole new set of problems.

QBorrowing Gen Z's love for labelling everything, I'm a 46-year-old homoromantic asexual Canadian faggot. For me that means I'd like to love and be loved by another man, but I'd hate having sex with him. To add a vexing complication, I also need some sort of power imbalance. Ideally, I would fall somewhere between being a man's sub and being his slave.

I’ve been searching for this since I came out in my early twenties. I've tried everything. Online, bars, hobby groups, friends, hookups. Vanilla relationships, single Masters, dominant couples, sex workers. I've spent thousands of dollars on both men and therapy, but here I am busted, miserable and alone. The point is that no one—and I mean absolutely no one—wants what I want. My dream dude doesn't exist.

It’s easy to tell someone to move on, that there are other fish in the sea, et cetera, but sometimes your sea is a puddle and you really are the only guppy. I'm considering ending my life before the end of the year. I can't shake the deep sadness and disappointment and misery that I feel—and this isn't even touching on my current unemployment or newly chronic health issues. What would you do if you were in my shoes? How does one switch off the built-in romantic drive?
—Sought A Dom Accepting Sad Singlehood

AI’m sorry you haven’t found your ideal man, SADASS, or the right dominant couple or a vanilla guy you could love and a dominant sex worker you could see on the side. Not everyone finds their ideal mate/position/situation, despite our best efforts, which is why it’s important that we build lives for ourselves that are rich and rewarding while we look for our dream dude(s). Because then even if we’re unhappily single—or we find ourselves unhappily single again—we would still have meaning and pleasure in our lives. And that makes it easier for us to live in hope that, should all the planets align, it could still happen for us or happen for us again. (Please note: I’m qualifying “single” with “unhappy” here not because all single people are unhappy—which is absolutely untrue—but because this single person, SADASS, is unhappy.)

I have to assume it has happened for you once or twice, SADASS. While none of your relationships with any of the vanilla guys, single Masters, dominant couples or sex workers you’ve met along the way turned into long-term connections, there had to have been some good times and real—if not lasting—connections over the years.

Instead of seeing those relationships as a string of failures because they all ended, SADASS, you should see them as a long series of successful short-term relationships. And while you may regret that none lasted for years or decades, there’s nothing about being partnered that immunizes a person against regret. If you were still with one of those vanilla guys, you might always regret not meeting a Master; if you were with a Master or a dominant couple, you might regret—from time to time—not having a more egalitarian relationship.

Although you say you’re not interested in having sex, SADASS, your interests are erotically charged. If your erotic-if-not-sexual fantasies are causing you distress—if you want to switch off your built-in romantic/erotic drive—anti-depressants often lower and sometimes tank a person’s libido. For most people that’s an unwelcome side effect, but you may find it a blessing—at least for now, SADASS, while you’re dealing with your health and employment issues. It’s an extreme move but it’s far less extreme than the one you’ve been contemplating, so it might be worth discussing with a sex-positive, kink-positive, reality-aware therapist.

Finally, please don’t end your life. The world is a far more interesting place with you in it. And while finding a romantic partner is never the solution to our problems—it’s only the start of a whole new set of problems—I’ve heard from countless people over the years who found something close to what they were looking for in their fifties, sixties and even seventies. But it can’t happen for you if you aren’t here for it.

This week on the Lovecast, Andrew Gurza on sex with disabilities.
I'm a bisexual man who works on a military base with so many hot men. But how the hell do I even get a quick cock to suck without getting fired for coming on to the wrong guy? Or beaten up? How do I approach someone who could be interested? It’s been forever since I've had a guy! Don’t tell me to try Grindr. I already did and most of the guys on there are not my style, and the two that were blew me off. I wish I was totally straight or totally gay cause the bisexual world is really depressing!,
— Basically I’ve Got Unfulfilled Yearnings

ATotally gay guys get blown off on Grindr and Sniffies and Recon all the time. Totally straight guys get blown off on Tinder and Farmers Only and Christian Mingle all the time. I’m not minimizing the unique challenges bisexuals face by bisexual men and women—biphobia is real—but everyone faces rejection, BIGUY. And while some gay guys don’t wanna date bi guys, you aren’t looking for a date. You’re looking for a dick to suck.

So get back on Grindr. When you see a hot guy on the street, on the subway or your military base, quickly open Grindr—or Scruff or Sniffies or Recon or all of the above—and if they’re on there too, send ‘em a message. If they’re interested, they’ll write back. If they aren’t, they won’t. If you’re worried a guy won’t let you suck his dick if you tell him you’re bisexual and you don’t mind blowing guys who might be biphobic, don’t disclose your bisexuality on your profile and stick to “Sup?” and “Looking?” when you message them.

And you know… back when men picked each other up in bars… you had to make eye contact with a lotta guys before you locked eyes with the right guy. If you made eye contact with a guy who wasn’t interested—if you weren’t his style or his type—he wouldn’t make eye contact with you again. That’s essentially what a guy is doing when he “blows you off” on Grindr: he’s taking a quick look, deciding you’re not for him and looking away—the exact same thing you’re doing to guys who aren’t your style or type. Guys who left the bar after two guys looked away never got to suck a dick, BIGUY, so don’t give up after a couple of guys blow you off on Grindr. Just keep looking around.

QI’m a 60-something straight woman. A few years ago, a longtime male friend and I, both in very unhappy relationships, did what I’d never done in my life: we cheated on our partners. We both ended our other relationships and the resulting two years have been wonderful. My guy is smart and funny and the sex is very, very, VERY good. We don’t live together and see each other on weekends. Now for the problem: I think he voted for Trump.

While he’s a political conservative, he’s not crazy and he has some reasonable viewpoints that I can tolerate even if I disagree. But not Trump. I don’t think a good person votes for Trump.

Practically speaking, it doesn’t matter, because we live in solid blue Washington state and all our electoral votes will go to Biden, but I’m not sure I can fuck someone who voted for Trump. But if I end things with him there’s a good chance I’ll never have sex again. I don’t think there are many opportunities for 65-year-old average-looking women, even ones with healthy libidos. Thoughts?

Update: Before I could even hit send on this email, Dan, I found out that, yes, he voted for Trump. I’m sickened that this person I care for voted for Trump! Do I end it?!? ,
—OH FUCKING HELL