The Halifax Regional Police department is changing its approach to sexual assault, shifting the responsibility from victims to perpetrators. 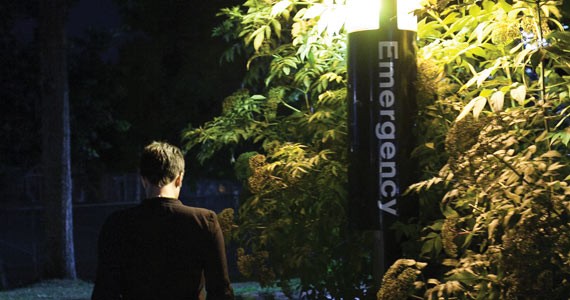 This story may be triggering for people who have experienced sexual assault. If you need support, call the Avalon Sexual Assault Centre at 422-4240 from 8:30am to 4:30pm to make an appointment. The after hours phone line is 425-0122, but is only for sexual assaults that have happened within the last 72 hours.

Jenna never wants to see her purple semi-formal dress again. It reminds her of that night at the beginning of April 2010 when someone slipped what she suspects was ketamine into her drink.

When she finished her afternoon class, Jenna rushed to her friend's place to get ready. She wore her mom's earrings and bracelet, black kitten heels and the silky, knee-length dress. It was the end-of-the-year celebration she'd been waiting for---a chance to blow off some steam with her friends and classmates at Dalhousie University.

She remembers everything about that night---dancing with her friends at a downtown nightclub---up to a point. It's as if the rest of the evening didn't happen.

She woke up in her bed, on the third floor of a house on a residential street in the south end, feeling nauseous and hungover. She stepped into the shower and felt bruises on her chest. It took her the rest of the day to piece together what happened. When she did, she felt embarrassed. She remembered seeing a man in her room. He sat in her computer chair, watching her. She asked him to leave but he wouldn't.

At the hospital, nurses confirmed her suspicions with a rape kit. They gave her a list of side effects associated with ketamine, a dissociative drug that can act as a sedative, and is sometimes referred to as a "date rape" drug. Her symptoms fit perfectly. The police took her purple dress for DNA evidence.

As long as there have been female students living in Halifax's south end, there have been men who watch, follow, grab and sexually attack them. A former Halifax Regional Police investigator called the area a "destination" for sexual predators because of the high concentration of young women. In most cases of sexual assault, however, the victim knows the offender.

This fall, Halifax Regional Police will tell university students to use the buddy system, travel in groups, never accept a drink from a stranger, cover their drinks and never leave drinks unattended. The HRP believe these tips will help women "avoid" sexual assault.

In February 2011, a police officer told York University students that women could avoid rape by not dressing like "sluts." Around the same time, a Manitoban judge sentenced a man to community service for rape because the woman's makeup and clothing had implied "sex was in the air."

Society tells women to cover their drinks, dress conservatively and walk home in groups---never alone at night. Though well-intentioned, these tips didn't work for Jenna. She covered her drink as often as possible that night, and she stuck with her friends.

For years, local women's groups, including the Avalon Sexual Assault Centre, have worked to shift responsibility from the survivor to the attacker. Sexual assault, which they define as "any form of sexual activity that has been forced by one person upon another," doesn't happen as a result of a victim's actions; it happens because the offender doesn't think consent is necessary.

And for the first time, local police are hearing them. Sort of.

Don't be that guy

Statistically speaking, Jenna's story is all too common.

According to a 2009 Statistics Canada general social survey updated every five years, Nova Scotia has the highest rates of sexual assault in the country---double the national average.

In Halifax, there's an average of one sexual assault reported each day. HRM has a higher rate of sexual assault than elsewhere in the province, and most sexual offenses happen in central Halifax.

Numbers of reported incidents in 2010 and 2011 supplied by Halifax police show an increase in sexual assaults in summer and fall.

But these stats don't come close to the real numbers. A 2005 Juristat study estimated only eight percent of sexual assaults are reported in NS. The majority of people who are raped are women.

According to the Nova Scotia Advisory Council on the Status of Women, 84 percent of people over the age of 15 who are sexually assaulted are women. The majority of offenders are men.

The nurses at the Avalon Centre's Sexual Assault Nurse Examiner Program (SANE) are trained to examine patients within the first 72 hours of sexual assault. Most of the people they see are women. In 2010 and 2011, the majority of people SANE helped were aged 17 to 25. A high number of cases in that age group involved drugs or alcohol.

For these reasons, HRP spokesperson Brian Palmeter says police are expected to provide safety tips to students this fall, "including ways for women to avoid being a victim of a sexual assault and other violent crimes."

"Police have often been criticized for putting all the focus on victims, when we provide crime prevention information after a crime," HRM public safety officer Don Spicer wrote on his blog last spring. "While we need to inform women of crime in our community and provide them with strategies on how to prevent themselves from being victimized, we also need to turn our focus to the perpetrators of these crimes who, most often, are men."

One such poster reads: "Just because she's drunk, doesn't mean she wants to f**k."

Another poster shows a man walking toward a car with a presumably drunk woman draped over his shoulder. Below the photo are the words, "Just because you help her home, doesn't mean you get to help yourself."

A third, which shows a woman passed out face-down on a couch, says: "Just because she isn't saying no, doesn't mean she's saying yes."

The posters will pepper Halifax this fall alongside a video campaign featuring local male celebrities speaking against sexual assault.

"We hope to teach bystanders some simple ways to express that degrading, abusive and violent attitudes and behaviours directed towards women aren't acceptable and won't be tolerated," Spicer says.

But while the campaign may be a step forward, Smith disagrees with HRP's assertion that changing women's behaviour can help them "avoid" sexual assault.

"The guidelines for students that HRP provided---'travel in groups, don't accept drinks from strangers'---is the conventional message for sexual assault prevention. This approach has been popular for centuries and does not work."

The poster campaign also points to the general attitudes surrounding sexual assault, she says, "that women are weak victims and men are scheming perpetrators." These stereotypes and sexist attitudes have to change before society can hope to end sexual violence, she says.

A practical model of consent

Citing a 1996 Canadian study that found one in five male students thought forced intercourse was OK "if he spends money on her," "if he is stoned or drunk" or "if they had been dating for a long time," Jenna says. "If we are ever going to change the statistics, this attitude needs to be changed."

The Canadian Criminal Code defines "consent" as "The voluntary agreement of the complainant to engage in the sexual activity in question."

When a person is accused of rape, their belief in consent is not a defense if the belief arose from self-induced intoxication, reckless or willful blindness, or if "the accused did not take reasonable steps, in the circumstances known to the accused at the time, to ascertain that the complainant was consenting."

Under Canadian law, if you're having sex with someone, you've got to have a good reason to believe they're consenting. Otherwise, it's rape.

But in a society in which much of sexual communication is passive, how do you ask for consent without killing the mood?

If the person seems too drunk, or if they're being quiet or not making eye contact, Hardy says you might want to reconsider having sex with that person.

People have asked her, "If I'm not getting a 'Hell yeah,' that means I'm raping them?"

This model of consent doesn't always require verbal communication. Voluntary actions can indicate consent too. If you tell someone, "I really want to kiss you," wait for them to mash their face into yours, Hardy says. If you ask, "Are you ready?" and they grind their hips into yours, it's a good sign.

There are sexy ways to ask for consent along the way, she says. Try practicing these on your partner: "Does this feel good?" "What's your favourite safe word?" "Are you OK with this?" "What turns you on?"

It's also important to practice ways of slowing down or stopping sex: "I'd like to talk about this first." "If I change my mind, we'll stop." "I don't like that, but I can do [fill in the blank]." And of course: "No."

Consent isn't a one-time deal, she says, it's an ongoing process. "Even if you were inside of someone and they say, 'Stop,' you stop. Consent never becomes automatic."

A real and present problem

For three months after the assault, Jenna stopped drinking. She couldn't have a glass of wine without feeling sick. When she "took the plunge" and went to a bar with friends a year later, she drank bottled beer since it was easier to cover. Only now, more than two years later, is she starting to see her personality shine again.

Video surveillance from the bar helped her identify the person who assaulted her. But after reporting him to Halifax police, she made the tough decision not to press charges. She badly wanted to for the safety of other women, but after talking to police about what to expect from the legal system, she concluded the trial would destroy her life.

From 1993 to 2007, the proportion of sexual assaults that had charges laid decreased from 56 to 30 percent while remaining stable for other violent offenses. The acquittal rate for those accused of sexual assault in Nova Scotia is 13 percent compared to six percent for other violent offences. And by focusing on a woman's character, defense attorneys may reinforce victim-blaming.

"Sexualized violence needs to be recognized as a real and present problem," Smith says. "Societal norms need to change; not the behaviour of women who are out for drinks with their friends."

"I always thought that it wouldn't happen to me because I am careful," Jenna says. "I use the buddy system, I don't let people I don't trust buy me drinks, et cetera. But it still did. I did everything I was supposed to do and someone still found a way."

*Jenna's name has been changed to protect her identity.