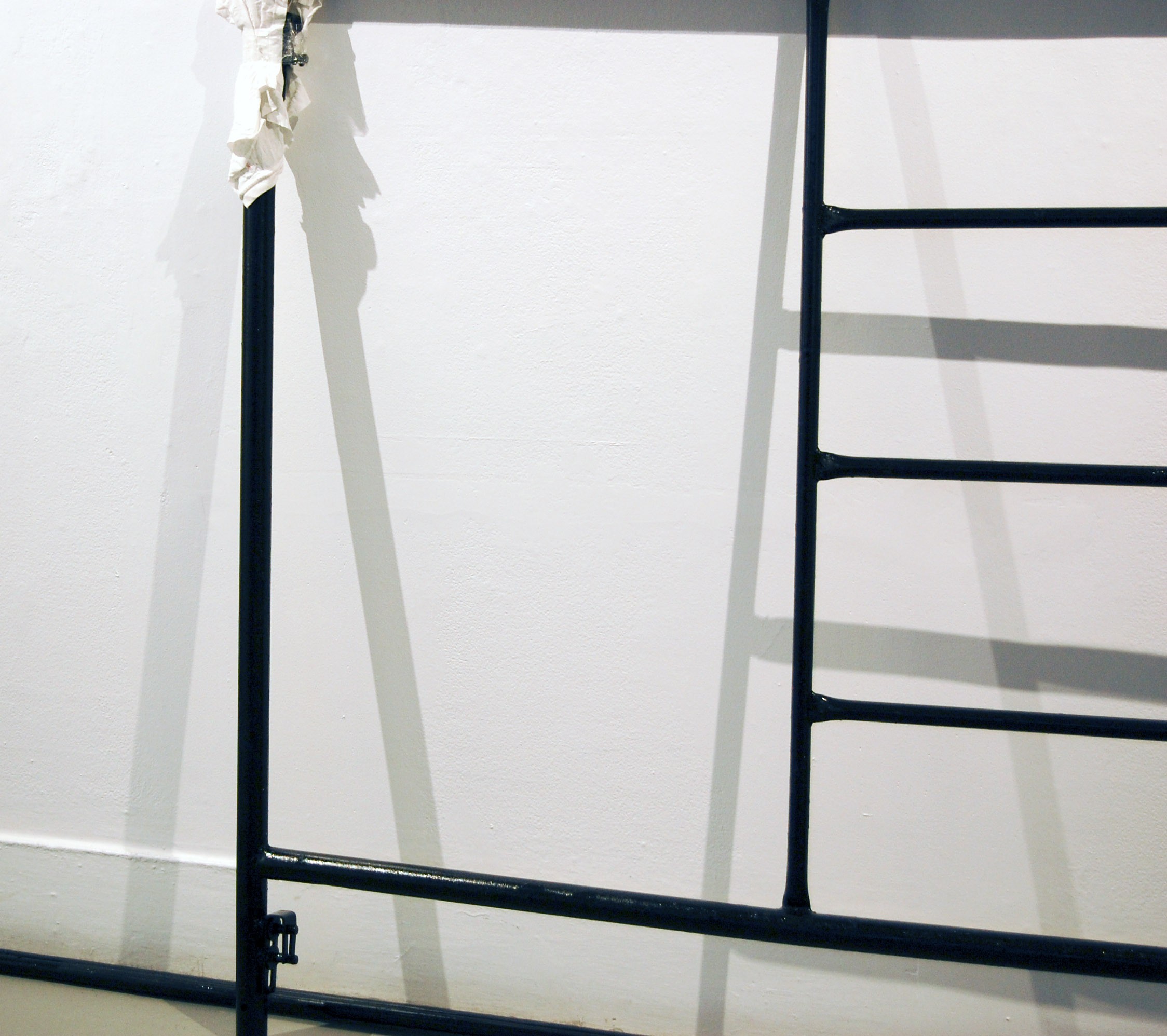 Elise Boudreau Graham's graduate exhibition, Or Best Offer (We'll Take What We Can Get) opened yesterday at Anna Leonowens Gallery (running to March 16) in the thick atmosphere of tension surrounding the fiscal and political situation that NSCAD University has battled since last year. A narrowly missed strike last week nearly dovetailed with Boudreau Graham's installation, appropriately themed to reflect some of the turmoil she saw during her graduate year.

Black scaffolding adorned with black pennants give off the feel of a used car lot, the windows are covered in black fabric and there is a short video on a loop of when NSCAD students stormed the Board of Governors’ meeting January 24.

“It’s about dressing up situation that isn't so great and selling it,” Boudreau Graham says. “Someone mentioned (the show) looked like a funeral... maybe it's a celebration of no strike.”

Boudreau Graham describes her show as “the art of negotiation in 30x20x9 feet. It is about give and take. It is about fighting the good fight even when you do not think the fight is any good.”

It’s something that NSCAD students and faculty are all too familiar with, but the theme of the piece goes far beyond the institution.

Impracticality (especially financial impracticality) is, unfortunately for some, a fact of life when pursuing fine art. Culture is seen as a luxury, and while a thriving arts and cultural sector is fundamentally integral to a healthy economy (according to Statistics Canada Study on Nova Scotia's Culture Sector from December 2003: “the direct and indirect impact of the culture sector in Nova Scotia, as measured by the contribution to the GDP, was estimated at almost $1.2 billion in 2001, with some 28,000 direct and indirect jobs depending on culture activities”), that point often gets lost when faced with debt.

In Boudreau Graham’s opinion, the financial benefits of art shouldn’t be anywhere near the top of a student’s concerns, let alone the concern of NSCAD’s administration. “I want people to understand that if you're talking about practicality—meaning art making money—then art isn’t practical. And that isn’t what we should be trying to do as a school,” says Boudreau Graham. “Our administration is not representing students by begging for scraps from the government.”

The idea of accepting any form of financial aid implies a mutual agreement, and for some students, it’s a deal they aren’t willing to make.

“I think we shouldn't necessarily be arguing about the value of art as benefitting society, because as it stands currently, society isn't something I want to benefit,” says Boudreau Graham. “What is radical about making art is a kind of negative productivity. We shouldn't be focusing on putting attention on the way art can work within capitalism, we should be recognizing that can be radical.”

The title of Or Best Offer (We’ll Take What We Can Get) implies settling, but aims to provoke the opposite reaction in the viewer. “The administration and Board of Governors at NSCAD can say that we (the students) are being foolish and unreasonable,” says Boudreau Graham. “But I think that we are practicing prefigurative politics; Demanding and acting out what we want for our school and our collective futures.”