Don't underestimate the value of a decent transit map

There's more than one way to bus around HRM, but good luck figuring that out. 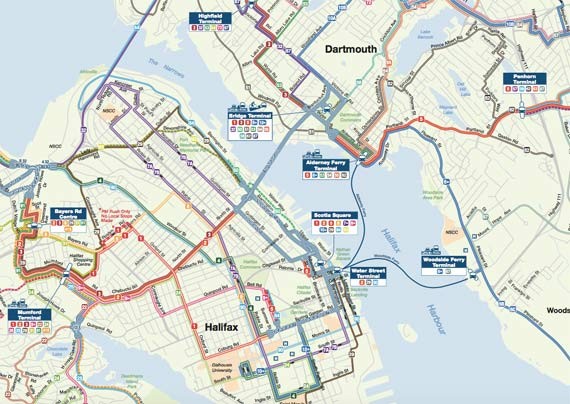 Halifax Transit has a new roadmap for success, but figuring out how to get around this city on anything other than a smartphone is still something of a paper chase.

On Tuesday HRM regional council tentatively approved an overhaul of the municipality’s transit network. The Moving Forward Together plan from Halifax Transit will begin dismantling and rebuilding the bus system later this year—barring 23 amendments requiring another staff report.

Five years from now when it’s fully applied, the new plan will modify virtually every aspect of the current transit system. That will include redrawing routes on a transfer-based network, and creating 10 new high-frequency corridor buses. But even with that simplified transfer-based system, Halifax Transit’s printed route map isn’t going to be the easiest way to navigate this city. So says Halifax Transit, anyway.

“Even now, I use Google Transit most often if I want to figure out where I’m going,” says Dave Reage. The acting director of Halifax Transit calls paper maps somewhat of a dinosaur. “The digital tools are far more powerful than a map would ever be.”

The city’s current public transit map, with its rainbow roads and overlapping routes, was designed in 2014 by LucidMap (formerly MapMobility) at a cost of $150,000. An updated map by the Toronto company included in the Moving Forward Together plan cost a far more humble $20,000. Both versions had to contend with neatly visualizing HRM’s sprawling transit network.

“Halifax is a city that is spread out over a vast geographic area,” says Carl Nanders, president at LucidMap. “It has a very small, highly-concentrated downtown and almost every route in the transit system goes downtown. So there's an incredible concentration of routes moving through a very small number of streets in the city.”

Nanders says that despite all the talk of extinction, paper maps and printed signs are seeing a resurgence in public transit systems across Canada.

“We’re coming out of a decade where, because of the birth of all this technology, there was an idea within transit and within government that actual physical signage, things like maps or signs, were no longer necessary because everything could be done on a Google map or whatever,” he says. “What we’re seeing in our clients...is that there’s a bit of a step back.”

He points to the Toronto 360 strategy as one example of analog over digital. That 2014 initiative installed way-finding monoliths around pedestrian-heavy streets to better orient the public and improve the big smoke’s walkability.

“Again, after a decade of assuming no one would ever need to consult an actual map,” says Nanders.

An illustrative, intuitive map is also useful for the many bus riders who can’t afford a smartphone, or don’t want one—not to mention those who can’t speak English.

Currently Halifax Transit is in the midst of technology upgrades to provide better service for some of those passengers. A new automated stop announcement system, along with a clear naming system for the city’s 2,700 numbered bus stops, should provide easier navigation for the novice bus rider when those improvements come online later this year. That will hopefully help HRM convert some new transit users, instead of just relying on a system best suited for current riders.

“I would wager too, though, that probably most of your regular riders don’t ever use a map because they know where they’re going,” says Reage.