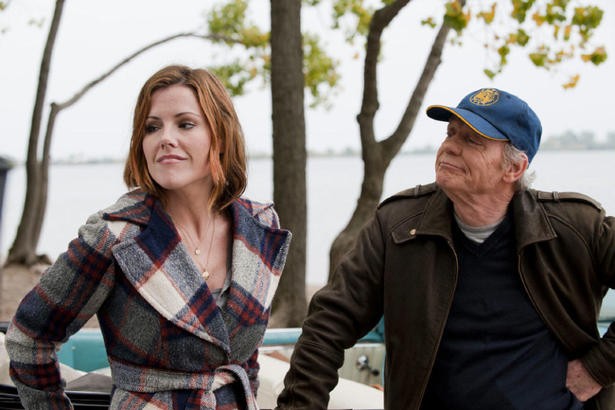 Kathleen Robertson and Doug McGrath in Down The Road Again
Donald Shebib’s 1970 classic Goin’ Down The Road didn't shy away from tragedy. The result is a depressingly realistic take on two Cape Breton pals, Joey(Paul Bradley) and Pete(Doug McGrath) going to Toronto to make their fortune but leaving with their tails between their legs. The sequel picks up 40 years later and asks the question, what becomes of old hosers? The film begins with Joey passing on and Pete retiring as a postie in Vancouver. Joey enlists Pete to carry out his final wishes, which means embarking on a reverse journey across the country, back to Cape Breton via Toronto, visiting characters from the previous film and discovering an unexpected legacy. A wizened but still wide-eyed Pete, again played deftly by McGrath, tries to make sense of his life and reconcile his mistakes. Pete’s second act in Down The Road Again offers up far less tragedy and far more hope.