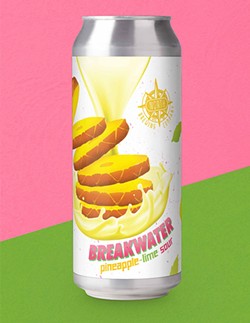 JOHN NEWGARD
Sweet can design by Josh Horner
The word flurries resurfaced in our collective lexicon, but North Brewing Company (2576 Agricola Street and 62 Ochterloney Street) is still dreaming of summer barbecues and sours. And we’re here for it. While the north end/Dartmouth brewer is re-releasing its crisp-weather appropriate, hefty treat Twinkle Pony tiramisu stout this week, it’s also celebrating the release of its third instalment in its Breakwater series—the sour.

“It was kind of a fun experiment and playing ground for us—it’s basically our sandbox,” says North’s Rozina Darvesh of the brew, which follows the summer-released mango lime and a coconut lime kettle sours (as well as a collaboration brew with Propeller Brewing, lemon meringue pie sour). “We have a little more time to experiment and do research on styles and we can say ‘OK, I wanna make a cookie beer’. We have a really fun working relationship on the production side we can riff off each other. We’re having a lot of fun at work.”

The season’s final Breakwater hit the shelves at both North locations last week, get it while it’s...chilly.