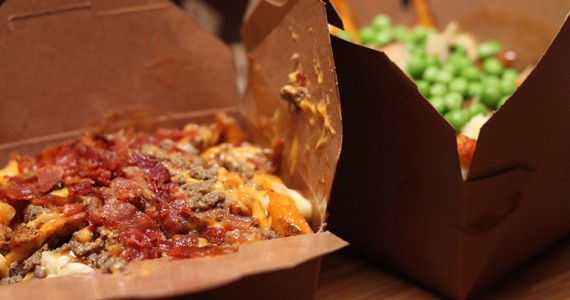 It's almost 2am. People are winding their way around one another, waving for taxis, giggling and wrapping scarves tight. Cold Warps have just finished a set in the balmy Khyber and a steamy stream of people plumes out of the door like breath into the chilly air. A half dozen of us wander around the corner up to Smoke's Poutinerie.

A small group of friends huddle outside the doorway, a fuzzy mirror to the same situation across the street at Willy's. It's a late-night, beer-fueled ritual. Through the smudged window you can see a sea of parkas, pink faces shoveling gravy-laden forks into laughing maws. It doesn't look worth it. Half of our friends leave. The rest can't be dissuaded.

We go inside and join the queue. The guy at the cash register diligently and quickly takes orders, cramming tickets with numbers into palms and moving on, while his colleague shouts out order numbers to the hungry crowd. Through the service window you can see ladle upon ladle of gravy being poured onto piles of French fries.

"Rock and Roll All Nite" is playing on a seemingly endless loop, but really only once, surrounded by samey party rock. The seats are packed and so is almost every square inch of the restaurant. The aisle leading to the cash is a traffic jam of people waiting to order and other folks leaning over shared poutine, forks heavy with stringy cheese and wobbly fries.

Combined, we order four of the variations: nacho grande ($7.99), curry chicken ($6.99), triple pork ($7.99) and Mama's poutine ($6.49). A bacon cheeseburger poutine ($7.99) is ordered for a late-night home delivery and pushed to the side while we all dig into the others. Each small box is crammed with thick fries, gooey cheese curds and a salty brown gravy, then covered with various toppings.

The nacho grande has chili, salsa, guacamole, sour cream and jalapenos. The Mama's poutine has some grilled chicken and green peas. The triple pork is topped with a heady mix of pulled pork, sausage and bacon. The curry chicken has, obviously, added chicken and a curry sauce. Each box comes with an inner monologue filled with Patton Oswalt and Jim Gaffigan punchlines.

The fries are quite good, even with the slightly steamed texture they get from the closed boxes full of salty gravy. The cheese and gravy give an undeniable salty sameness to everything on the menu. But it's poutine: it is what it is. I actually do like the savoury curry the best, with its slight earthy notes, and the taco flavour is surprisingly good with the heat of the jalapenos and surprising depth from the mix of sour cream with gravy. The pulled pork is a little too sweet.

After we reach our poutine limit, we move to leave. There is a very tall, very drunk man teetering in front of the doorway, eyes heavy. "I feel delicious. How do you guys feel?" he says to his friends. He realizes he's in the way and shuffles over. So we're free, out of the gravy-soaked din of Smoke's and into the cool burn of nighttime winter air.

This was the time to eat at Smoke's. A simple lunch or dinner may not have worked as well, but this---a 2am, post-drink binge---is what this restaurant is built for. As soon as we walk out the door, it's essentially a walk of shame back to our respective houses.

The next day I walk into the brisk morning air, ready for a new day. As soon as I walk out the door, there it is, crumpled on the ground, looking almost embarrassed to be there: a box from Smoke's. A box now full of nothing but regret.