How to achieve the perfect wing in the eyes of Shayne Chapman. 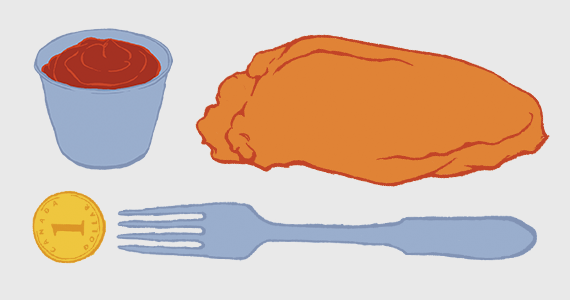 SHAPE
A question for the ages: Flats or drumsticks? It's a no-brainer for Shayne Chapman AKA The Wingman, a sucker for the daintier, flat wing. "It's like, rip off, push in, done. Very easy to eat." He says boneless wings are just chicken nuggets in disguise: "The experience of eating a chicken wing is gone if there's no bone. That's part of the fun of eating it, the work."

BREADING
Breaded is the preference for Chapman, with the Alehouse winning his praise for consistency and crunch."This is my go-to spot in Halifax for wings and I have had more than my fair share over the years," he says. That's not to say the Wingman is opposed to a naked wing, though—he cites The Argyle and St. Louis as being a notable pair of coating-free zones.

"Sometimes the celery and carrots are my biggest vegetable intake for the week." @HalifaxWingman tweet this

SAUCE
Chapman prefers his on the side—to preserve "the integrity of the crispiness"—and gives props to Bubba Ray's for having the city's best selection for dipping and dunking. "It's great to be able to have so many different options to choose from especially if you keep going back to the same place," he says. He loves a dry rub of any kind—even if that means sprinkling a little salt and pepper before hitting the sauce—and enjoys a little heat (nothing with a waiver) and Cajun-style spices.

SERVICE
It matters, which is why he has dedicated an entire section of his rubric to the experience portion of the wing night. One example of the good stuff? "Wet naps, it's as simple as that," says Chapman of his frequently sticky fingers. "Not everywhere has them."

GARNISH
"Blue cheese—not a fan. Sometimes the celery and carrots are my biggest vegetable intake for the week, though."

METHOD
All hail the deep-fryer! Because of his love of the crunch, Chapman prefers an expertly fried wing that's juicy on the inside and crispy on the outside.