In the past few weeks the Harper government has become more blatant in its anti-environment stance, and much of the story has become public via whistleblower Lawrence Frank, former communications guru of ForestEthics.

Frank says that the existence of anti-environment rhetoric from the feds is common knowledge among environmentalists. But it came to a head when he swore an affidavit stating that "on January 5, 2012, I and other Vancouver staff of ForestEthics were called into an office and informed over the phone by our senior supervisor, Pierre Iachetti, that the Government of Canada had informed Tides president and CEO, Ross McMillan, that ForestEthics was considered an 'enemy of the state.'"

The statement went on to say that the PMO had given Tides, a group that provides financial and project management services to the nonprofit sector, a deadline to cut ties with ForestEthics or be shut down. Frank's statement has created a rift among those involved---if the goal was divide and conquer, the government is halfway there.

Frank was fired and has since gone very public with his accusations and asked Tides and ForestEthics to do the same---which he says they are reticent to do for fear of getting Harpered. As the Globe and Mail stated January 25, "Ottawa's pressure has caused pain for environmental groups. Some donors have been spooked away. Others have asked that they be kept anonymous."

All this because ForestEthics opposed the Northern Gateway pipeline that would let Canada sell its tar sand oil to Asia. A few days after Frank says he learned about the PMO's threats, minister of Natural Resources Joe Oliver said in an open letter, "There are environmental and other radical groups that would seek to block this opportunity to diversify our trade," confirming this government thinks protecting human habitat for future generations is crazy talk. 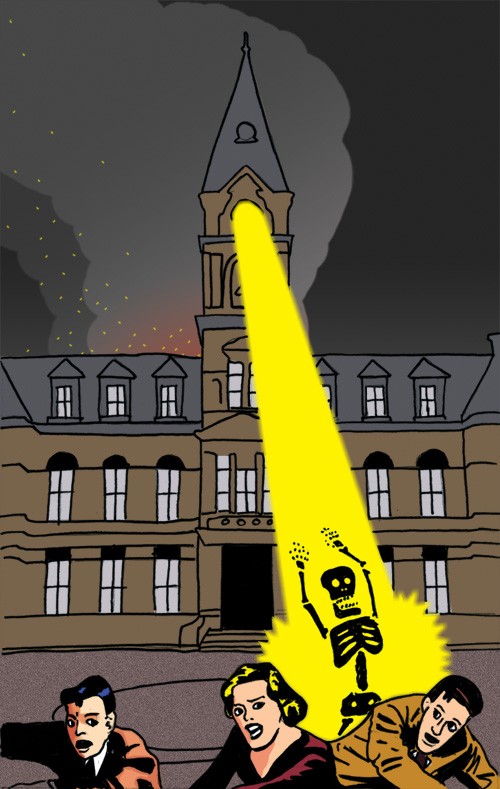 Halifax MP Megan Leslie has subsequently grilled Oliver in parliament, asking him repeatedly whether or not he accepts the science of climate change as fact. He has yet to answer the question.

Meanwhile, Frank doesn't come off as particularly radical. "I'm not saying just shut down the oil sands," he tells me via telephone. "But allow this industry to exist for maximum value and responsibility around climate change. We need informed debate."

In Nova Scotia, environmentalists are not surprised by the feds' anti-environmentalism. The Nova Scotia Environment Network, an umbrella group representing about 50 eco-nonprofits across the province, has suffered from it already. NSEN has trained eco-non-profits in legal issues and communications, and has been an invaluable networking tool for two decades.

Last April, NSEN was Harpered---its long-term federal funding was cut, part of the gutting of Environment Canada. "I'm working very part-time," says Janelle Frail, NSEN's director. The cuts came sooner than she expected, but she knew the shoe would drop before the end of the current Conservative majority. Federal funding has been unstable since Harper was elected in 2006.

In response, NSEN members avalanched Harper and Environment Minister Peter Kent with letters and email. They received form letters in response saying too bad, the internet is a more efficient training and communications tool than human beings.

"It fits with the way Harper's treating environment, social justice and women's groups," Frail says. "He wants to squash free speech against the tar sands; there is no space for democratic action."

For his part, Frank's experience has turned him into an optimist. "I've gotten hundreds of emails and phone calls from across the country, including Halifax," he says. "It's an incredible outpouring of nonpartisan public support. We can create more informed debate in this country."

"Ten-inch foundation wall---R5, based on critical mass. Two-inch rigid foam---R10. Spray foam---R28, applied by guild contracting. Total R-Value---R43. Our envelope as a manufactured home is much tighter and energy-efficient than most homes since we can provide a continuous vapour barrier. All windows were spray-foamed and surfaces that were wood sheathed were R29 (R24 fibreglass and R5 rigid)."