The media needs to do better when covering issues that touch marginalized people. 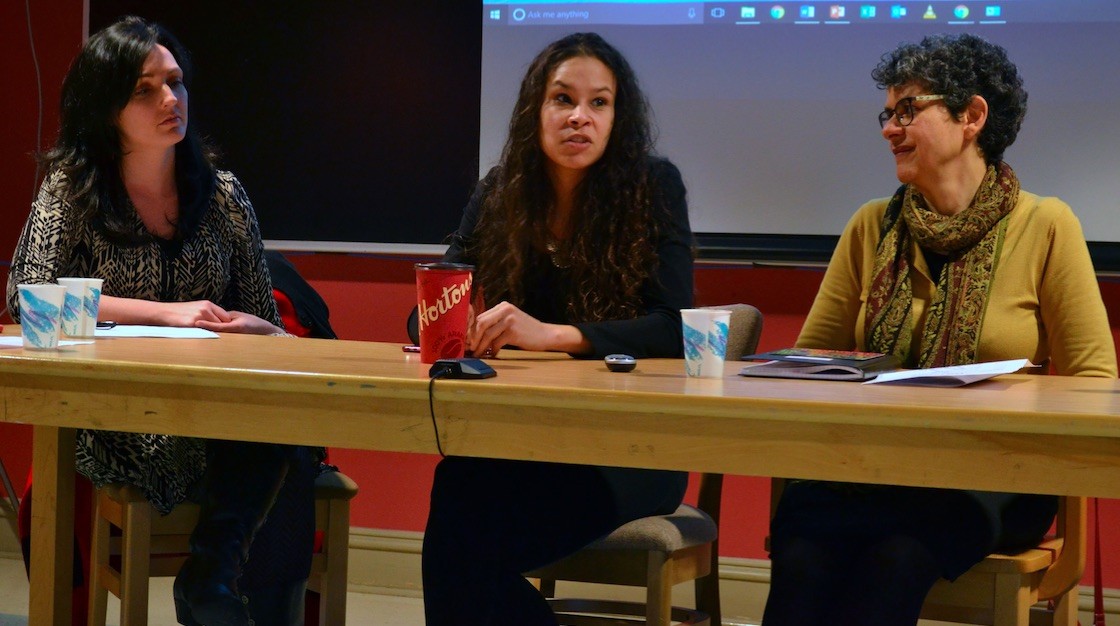 Media “significantly shapes public opinion,” says Naiomi Metallic, so the way reporters write about marginalized communities has an impact on them.

“The media has not been neutral in its history of how it deals with Indigenous people,” says the Mi’kmaw lawyer and assistant professor at Dalhousie.

Metallic was one of three panelists at a Talk Justice event held Friday afternoon at the University of King’s College. Nabiha Atallah of the Immigrant Services Association of Nova Scotia (ISANS) and El Jones—spoken word artist, activist and journalist—joined Metallic on the panel to speak about the media’s role in justice and the way news organizations often frame Black and Indigenous people as well as immigrants and refugees.

“Media has perpetuated colonial constructs about native inferiority, and that also contributes to the marginalization of Indigenous people,” says Metallic.

An example she’s noticed is journalists misusing terms to refer to Indigenous peoples. Distinct labels like First Nations, aboriginal, Inuit and Métis are often lumped together when they are not actually synonymous.

“I know those are confusing issues, but there are resources available out there,” Metallic says.

She also feels reporters will look for a 30-second soundbite, even when an issue is too nuanced to be summed up so simply. Atallah says that can come from producers and reporters not allowing enough time in order to do in-depth reporting.

“Provide enough time to really develop stories,” she says. In addition, it’s important “to provide follow-up, so there can be an deeper exploration of an issue if you can come back to it again, periodically.”

Atallah feels 2016 was “an extraordinary year” for immigration in Nova Scotia with the arrival of the Syrian families. News outlets generally did a lot of good coverage, she says, but there’s plenty that could still be improved on.

The coverage of “success stories” and how they’re presented can be problematic. Economic success tends to be seen as the indicator for overall worth, says Atallah. On top on that, other narratives fall to the wayside: the experiences of immigrants with disabilities, for instance, are not very present in the news.

There’s also the importance of first voices—allowing immigrants to speak for themselves rather than simply interviewing a representative from ISANS.

“When I speak on behalf of other immigrants, it’s not nearly as powerful as individuals speaking themselves,” says Atallah.

In a similar vein, Jones says she’s often been seen by reporters as a “go-to” voice for the Black community, especially since she became poet laureate (a position she held from 2013-2015).

“There’s always some people that are appointed for the community and the media goes to you every time there’s an issue,” says Jones. “The very kind of construct of who speaks for the Black community is really a creation by white people in the first place.”

“Sometimes, when we talk about good media or bad media what we mean by ‘good’ is often mired up in respectability politics,” she says. There’s an idea that “coverage of working class people might shame us or, you know, we don’t want that person talking on the news that can’t speak English properly, right?”

This perception, explains Jones, comes from a long history of Black people trying to defend themselves and survive in a society that doesn’t see them as human. “But that in itself is a really problematic construct.”

Language is another key issue, notably when it comes to headlines about crime.

“We have to look at the very concept of how language has consistently been used against Black people to define us out of ourselves,” says Jones.

Many of these widespread problems in media draw attention to the fact that marginalized and racialized people are underrepresented in the field of journalism. That won’t change overnight, but Metallic, Jones and Atallah all had ideas for how reporters can do better. Listening to what’s being said, even (or especially) if it’s criticism is crucial.

“Be open-minded,” says Metallic. “Don’t be defensive if an Indigenous person corrects you.”