One more development squeaks in before the centre plan 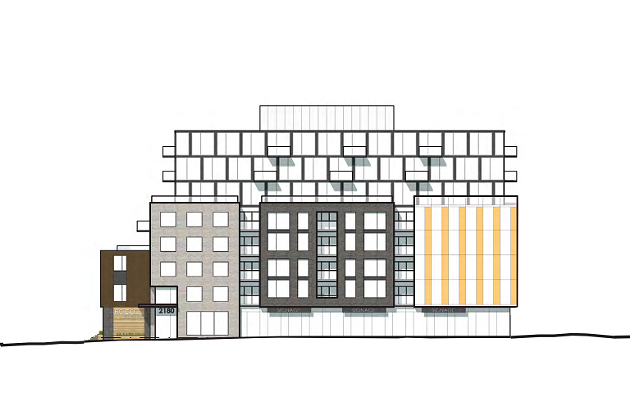 The latest development to get approval while the Centre Plan nears crunch time will sit eight and a bit storeys high on Robie Street between Cunard and Compton Streets facing the Halifax Common. Neighbours from the area came forward at the public hearing to voice their concerns, but at this stage in the process they held little weight.

The development proposal from WM Fares Architects was originally proposed as a 13 storey building, and has been whittled down to eight (plus a penthouse, so nine) with staggered increases in street wall height on the sides of the building facing Compton and Cunard Streets. It will house approximately 90 mixed-sized residential units and 75 underground parking spots.

Katie Campbell lives in the area and spoke to council about the negligible impact of the hearing at this stage in the process, noting she didn’t think she could say anything that could stall the process. But wanted to point out that WM Fares proved themselves capable of making many concessions with the specs of the building, so why couldn’t they go further to ensure affordable housing is included in the plans.

A Compton Street resident, Shannon Cam raised concerns around increased traffic on the street which already sees a significantly higher number of cars than the next street over, Williams Street.

VP of planning and design for WM Fares Cesar Saleh says that street calming and traffic concerns are beyond the scope of their project, but that they’ve done lots of work to give back to the community by creating jobs and places people can live.

Councillor Waye Mason responded to affordable housing concerns with his stance that forcing developers to give discounted rates is not a sufficient solution for the problem.

Because of the drawn-out process of by-law amendments, the design team was working towards parameters of what the centre plan looked like in June 2017, but staff say as of right now it still fits well into today’s centre plan, too.

Councillor Smith raised concerns about the five storey street wall height on Robie and part of Cunard Streets, moving an amendment to have them decreased which failed after a tie vote. The original motion for the plan passed granting a green light for the project.