Novalea gem Caribbean Bliss has a new owner, but the same, homestyle flavour. 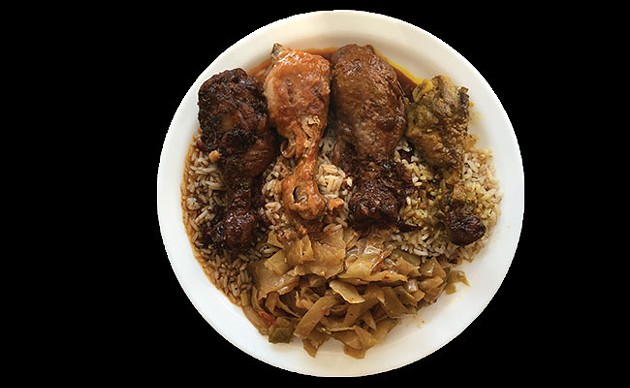 Kate’s Special offers diners a little bit of everything.

Elias Fathallah hates cooking. "But I love to clean," he says with a laugh. Luckily Caribbean Bliss has Rickey Smith, a chef who has been in the kitchen since before Fathallah bought the business in September of last year.

Only a few minutes later he's putting rice on the stove and scooping piles of braised cabbage onto plates alongside rows of tender, flavourful chicken legs. He runs them out to a family seated in the back dining room of the restaurant as his small daughters sit in the cramped seating area, the older girl entertaining her sister by drawing versions of themselves as bats.

Fathallah grew up in Lebanon during the Lebanese Civil War. He studied hotel management and worked at restaurants, starting as a dishwasher and eventually managing an upscale French restaurant. After moving here in 2011 he worked at various restaurants around town—Willman's Fish & Chips, Cora's—but always held onto his dream of owning his own spot.

"To be honest, before I bought the place I didn't know anything about Caribbean food," Fathallah says. But when the previous owner decided to retire and the opportunity to buy the restaurant presented itself, Fathallah couldn't resist. "I did my research to see what the food was like and I was so impressed. It's something special: Unique and healthy."

The menu has everything from ackee and saltfish to curry goat and . A highlight is Kate's Special, named after his daughter. The plate includes an earth-toned rainbow of chicken legs flavoured with curry, jerk seasoning, barbecue sauce and brown stew gravy, rice and beans and a flavourful pile of steamed cabbage.

Caribbean Bliss is really just Fathallah and Smith. It's a small business and it can be a struggle. They only make eight Jamaican patties each day–"four spicy and four , and when we sell out, we sell out," Fathallah says. Some people have been surprised, even judgemental, to find a Lebanese owner of a Caribbean restaurant, but Fathallah simply believes in the business, just like any other restaurant owner.

"Now the dream has come true," he says. "I didn't give up on it. I'm trying hard to make it work and make everything a success and be a good example for my kids, too, to show them that you have to keep going. That you don't give up."

Where I work: Rage Room Halifax