Eman Mustafa gets inspiration from everywhere she looks, transforming the everyday into the sublime with her versatile designs that blend structure with softness. 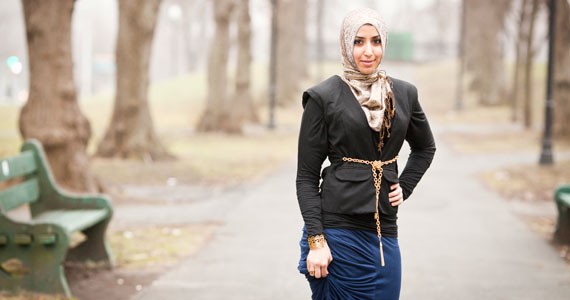 Eman Mustafa is a consummate fashionista. Immaculately put together, the young designer can't stop thinking about clothes. "I fill my sketchbook with random stuff," she says. "I'm not great at drawing but I make my own notes and figure out how to translate it."

Nothing is safe from her appraising eye: a metal chair at the gym, the shape of a building, a piece of office equipment or curtains all are at the mercy of becoming patterns for her dresses, shirts or skirts.

Mustafa was raised in New Jersey and spent a few years in Jordan before coming to Nova Scotia and doing a four-year chemistry degree with a minor in business. She's professional and matter-of-fact---Mustafa doesn't mince words. "I never really was artistic," she says. "When I went to school I wanted to make make-up---I wanted to do a masters in cosmetic chemistry---but the whole four years whenever I looked at something I wanted to convert it, like the lab coats. I hated those lab coats.

"Sometimes something new springs into your head and you can't ignore it."

And so began her foray into fashion. She enrolled in the inaugural year of Centre for Arts and Technology's fashion design and merchandising program. Her debut show, "Majestic Pleats," at last year's Atlantic Fashion Week showed impressive sophistication for a designer so new. Flowing chiffon skirts that dusted the ground were cinched with a structured waistband (Mustafa spied a curtain and thought the gathered tops would make a perfect detail), loose shirts hung off shoulders--- gathered and draped, the clothes showcased comfort, but would transition to an evening in a snap. For her graduating show, Mustafa took inspiration from 1920s Middle Eastern menswear to make a collection that was decidedly feminine.

"It was a lot of loose skirts and pants, vests, very draped," she says. "Even though when you look at it you don't think menswear at all, it's very feminine."

With the exception of her graduation show, she doesn't work from themes. Instead her taste is the common thread of her collections. Currently designing a pageant dress for Nova Scotia's Sarah Harrison, who will be competing in the 2013 Miss Universe competition to represent Canada, the dress will be pure Mustafa--- structured yet flowing, but this time with a healthy dose of Swarovski crystals. It is a pageant, after all. "Actually that design I took from my mirror in my childhood home in New Jersey," says Mustafa, describing the gown's bodice, an angular seashell design. "For some reason it really stuck with me."

What makes her work so immediately appealing is the wearability; as an emerging designer, Mustafa is finding her footing, but her clothing has the sophistication of establishment. "It's funny, I don't ever sit there thinking, 'I'm going to do a structured-slash-soft piece,' yet I always end up doing that," says Mustafa. "I really like that structured look but at the same time I want something really feminine and soft."

She goes with what she knows and, by her own admission, she's not a huge risk-taker, but most fashion consumers don't want to take a huge risk, they just want to look good. She hates coming up with artsy names for her collections or describing her pieces in overly flowery language. If her inspiration came from the back of a metal chair she saw at her gym, that's really the only way she's going to say it.

Building her line will come in baby steps. An upcoming show in California has her thinking about buyers and how to create something targeted to a market, and this is where her practicality shines. "My year goal is to have pieces either made in-house or at a manufacturing facility," she says. "I really want to make a collection that's sellable and easy to produce. That's a big step and a big risk, but I'm really eager to do it."

Like so many young talents, she talks about moving to Toronto for greater opportunities. "I just don't want to move too fast," says Mustafa.

"Designing is one thing, if you have an idea that you can get it on paper that's nice, if you can draw and make it pretty that's great as well but if you can't actually get it in reality, that's what matters."

The tagline for her graduation show was "Make your life path your own way," and if anyone is fully realizing that motto, it's the driven and talented Mustafa.