Emma FitzGerald's jeans in the genes

A new art show draws attention to the devastating impact of denim production. 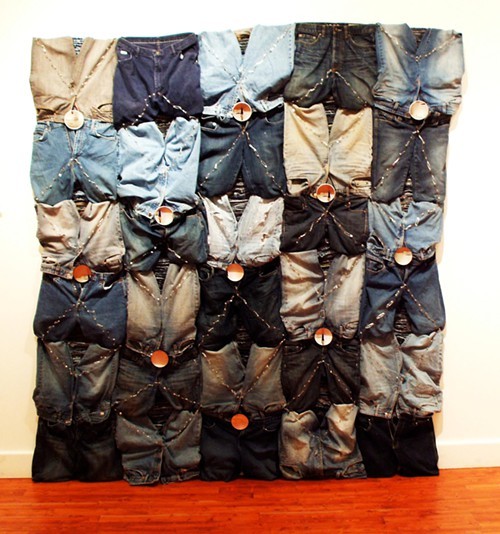 There’s nothing more ubiquitous than an old pair of blue jeans. It’s our reliable go-to uniform as well as a social status indicator. Cowboys, construction workers and supermodels wear them, but we rarely think about where all that denim originally came from, or where it goes once our favourite pair is completely shredded.

Emma FitzGerald has been thinking and working with denim for awhile now. Her new exhibition, Out of the Blue: A Letter from Lesotho, which opens Thursday, 5:30pm at The Artists’ Quarter (2594 Agricola), explores the myriad of issues that are tucked away in every pair of Levis. The show runs until June 27.

The Halifax artist and architecture grad was born in Lesotho, a small country surrounded by South Africa. This is where Bono started his (RED) campaign, and it’s here where The Gap, Levi Strauss and other manufacturers make 26 million pairs of jeans each year, according to lesothotextiles.com. One denim mill produces an astonishing 1.3 million yards of denim annually. But this development has come with a high cost, especially for the 30,000 mostly women who are employed by the textile industry, which has been accused of poor working conditions, polluting waterways and burning discarded fabric and plastics.

FitzGerald wanted to draw awareness to the terrible situation, so she put out a call for unwanted denim donations. The new Clothing Textile Action Group at the Ecology Action Centre was helpful, as was Frenchie’s. The thrift store donated their “unsellable jeans,” which FitzGerald says would have been eventually shipped to Africa and India, “really highlighting the denim cycle.” Sewn together, sometimes glued until hardened, some intimately marked with pen, the jeans now reflect these women’s traditional homes and weaving patterns, which FitzGerald says are disappearing.

For the installation “See Reverse for Care” (see above), she sewed together 30 pairs of jeans in rows, into a wall. Large stitches through the piece inspired by traditional patterns that the women would use on their homes, a place where FitzGerald says they would “typically have power in their culture,” whether it be celebrating a harvest or engaging in a political discussion. She also uses mirrors—-relating to initiation ceremonies—-but this time, the mirrors reflect the gallery-goers’ own clothing choices.

This part of her larger project is mostly about awareness, but FitzGerald’s vision is “ultimately collaborative: To go work with the Lesotho women and find ways the denim can be creatively reused.” Close to home, Gaspereau Press has made a soft paper out of denim, which she’ll use as a guest book at the show. When FitzGerald contacted The Gap, she discovered their social responsibility website (gapinc.com/socialresponsibility), which details how jeans were being used as insulation in New Orleans. And in the UK, two social anthropologists are examining humanity through a pair of jeans. It’s a fascinating read at ucl.ac.uk/global-denim-project.