The artist follows up her popular Hand Drawn Halifax with Sketch by Sketch: Along Nova Scotia’s South Shore. 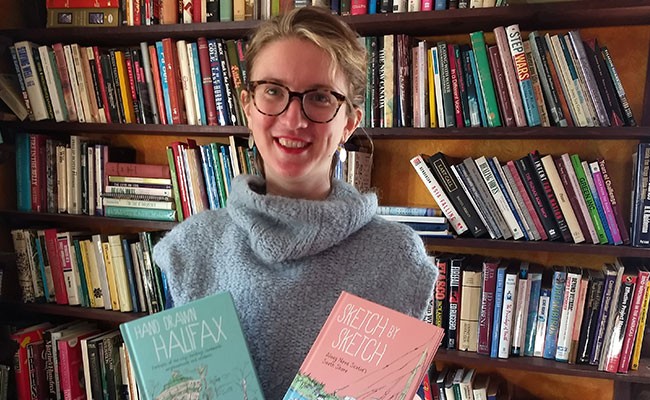 Emma FitzGerald struck a chord with Hand Drawn Halifax, her 2015 collection of portraits of buildings, people and landmarks from around town. Last year's companion colouring book pushed local pride even further, even as FitzGerald herself was already looking down the shoreline to the next book.

Sketch by Sketch: Along Nova Scotia's South Shore was drawn and assembled over one year and launched on November 22 at the Central Library. Despite the tome's idyllic scenes—FitzGerald's intimate, detailled lines remain packed full of sharp observation and casual charm—it wasn't always easy for the artist to get to the sites.

"I don't drive, so obviously I don't own a car, and there's not great transit down there," says FitzGerald. "I had to reach out and say, 'Is anyone going to Liverpool, by chance?' And then I would only have one day." These one-day excursions produced three to four drawings per trip. "My sketching is quite quick."

The area has obvious attractions, from the rocky seascapes to the well-known tourist trappings and its more recent hipster leanings as artists have made a community there—"they try to recreate some of those city pleasures like good coffee and good food"—and FitzGerald has tried to capture the gamut.

"The south shore has so many traditions and well-kept secrets but at the same time it's loved by so many people," she says. "I'm not from Nova Scotia so the fine line was 'What do I reveal of these secrets?' The overall strategy was the familiar and unfamiliar, side by side."

Sketch by Sketch is arranged by season. "We tried to do it chronologically, from Peggys Cove to Yarmouth," FitzGerald says, "but with that it was Christmas in Mahone Bay on one page and the summer in Lunenburg on the next. The idea to put it in seasons—that has a more narrative element. The summer chapter feels like the most full and lush and has the most illustrations, maybe because that feels the most full for us."

FitzGerald is living in Vancouver until May, working on a hand-drawn book about that much bigger, much more diverse-in-all-ways city—"they have a very good transit system there," she notes—but is currently back home on a book tour. She'll be signing books and selling cards and prints the Halifax Crafters' Market this weekend. It's early, but she's pleased with the reception for Sketch by Sketch.

"It's going to mean different things to different people," she says. "There's so many more people on the shore in the summer." She's trying to stop comparing this book to her experience with Hand Drawn Halifax. "They're two babies and each one's going to be a little different," she says. "Each is a thing I can be proud of."