The Nigerian-born, Halifax-based artist is staying dedicated by creating a James Bond-themed artwork every day in 2018. 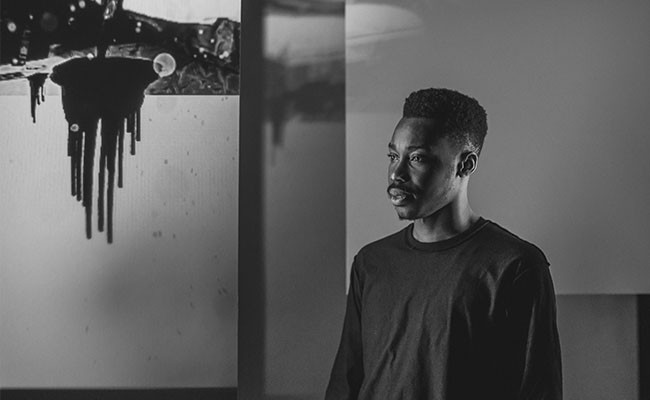 Emmanuel Nwogbo's favourite James Bond is Sean Connery. Growing up on tales of spy missions and perfectly gelled hair, he's seen all the Bond films, but it's Connery's '60s capers that stand tall above the rest: "I keep watching those ones because they're so ridiculous. Some of the names are hilarious, stuff that you could only do in the '60s. They didn't really care, they just went over the top—scenes of James Bond fighting people on skis, from parachutes, helicopter battles, the most insane things you'd ever see," Nwogbo explains, folding his tall frame into a chair at a local cafe.

It's easy to see the sense of humour appeals to the young digital artist because he, too, has a knack for constructing pieces laced with camp, winking at the viewer with a joke you have to pay attention to get—but when you do, you'll cackle.

Though a master's thesis on the oil industry in his native Nigeria has him planning to one day pursue design activism ("I wanna do design for positive change and have a social impact"), these days Nwogbo's taking a break from political pieces. Instead, he's focusing on his craft, working a day job in Halifax while also churning out one piece of James Bond-themed digital artwork daily (see them at 365jamesbondcharacters.com).

"The problem I find myself having is because I'm working full-time, many hours, I don't have the time to do design work and there's no motivation," he says. "So, sometime last year, I met this lady who's also an artist and she started telling me about daily design projects to keep yourself motivated."

He opens his tablet and flicks through a spreadsheet of obscure Bond girls, villains and spies. Some, he has rough ideas for—a pop culture reference to mine and reframe, like Day 32's piece, which sees three nameless villains from Dr. No stand in for Paul and Ringo on the cover of Abbey Road, "because they pretend to be blind and they kill someone and then cross the road, so it's a riff on the story where John is the priest and George is the grave-digger."

Others could be illustrated, as some of the names on his list have a single scene to work from—see Day 12, a pop art-y feeling illustration that captures Pleydell Smith, chief secretary of the colonial government in Jamaica from Dr. No.

He chose the Bond films because he knew they'd be expansive enough to have 365 days' worth of characters, and because even when Bond is bad, he's still great. "Like Moonraker, where the villain decided he was going to blow up Earth and create a new world in space. It's really, really ridiculous but really great," he says. "They did that because Star Wars was such a huge hit and everyone wanted to see space movies. A lot of people hate it because it's James Bond fighting in space, but it's actually really funny."

Nwogbo says he's worked anywhere from 30 minutes to seven hours on a single piece. Despite the huge time commitment, he's yet to miss a day. "I'm trying to diversify myself and that's why I like this project," he says. "My only goal is to make sure every day looks different, to do new things—and things I'm uncomfortable with."