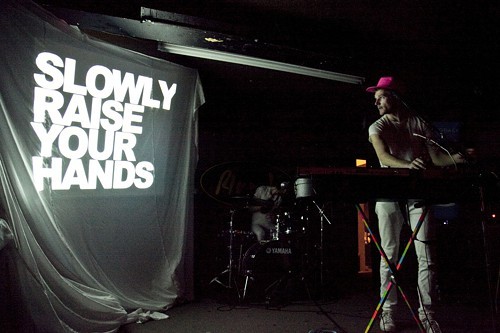 As we speak, the Ghost Bees, Joel Plaskett and Rich Aucoin are all hanging out in Brighton, England with the likes of Groove Armada and Broken Social Scene, hopefully sharing bottles of Patron and cackling over their eventual domination of the world.

They're playing at the Great Escape Music Conference and a host of other dates in and around the UK as part of Music Nova Scotia's "export mission" to the UK. Music Nova Scotia Executive Director, Scott Long, President Brian Doherty and Education and Events Coordinator Serge Samson will also be in Ireland to meet with industry buyers, spreading the good word about MNS far and wide. You can bet our throes of envy are as green as those peat-covered Dublin hills. Great Job, you guys!

Music Nova Scotia’s showcase will take place Thursday, May 13th, at the Queens Hotel. Doors open at 12 p.m., with Ghost Bees on at 1 p.m., Rich Aucoin on at 2 p.m. and Joel Plaskett playing at 3 p.m. Festival wristbands are required for admission.
Ghost Bees have a second show at The Great Escape on Thursday, May 13th at 7:45 p.m. at the Komedia Studio Bar.
Rich Aucoin also has a second show at Above Audio on Saturday, May 15th at 10:15 p.m.
Joel Plaskett’s other Great Escape shows are Thursday, May 13th at 8:30 at the Komedia Studio and Saturday, May 15th at the KuKu Nightclub.
Other UK/Ireland shows: