Jon Epworth steps out of his comfort zone for a new, louder, concept record FAILURE EPICS . 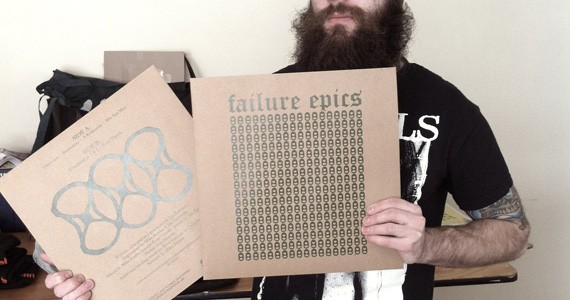 Jon Epworth has been holding his powerful departure FAILURE EPICS captive for nearly three years. It was finished, but it wasn't ready. The timing needed to be right before the six-track, prog-rock influenced record that Epworth composed and recorded almost entirely on his own (with the help of a couple of friends) was ready for the masses. "It took awhile to feel comfortable releasing it," he says. "Anybody who's trying to carve out a new path for themselves, if they're really challenging themselves they're gonna feel some self-doubt. At a certain point I had to say to myself...I have to be the one to really like this." Luckily, Josh Hogan liked it too, and wouldn't let Epworth forget it until he decided to join the Diminished Fifth Records family to release the project, which he calls an "allegory about the environment." Leaning to a heavier side of music, and awakening his inner composer, Epworth says FAILURE EPICS (originally named A Maculate Conception) came from a desire to tell a story in a similar vein as an opera, and also from his hunger to make something more metal oriented. And the result is epic, to say the least. This, however, could be your only chance to see FAILURE EPICS live (with a band made of the fellas from Glory Glory and Jason Vautour), so if you're going to buy the record...you should probably get it Friday night at the Seahorse.