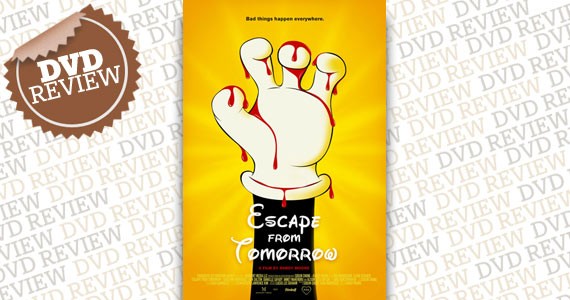 Writer-director Randy Moore challenges convention in his feature film debut. Covertly filmed on hand-held cameras at Disney World and Disney Land, Escape From Tomorrow is an epic example of guerrilla film-making. Escape From Tomorrow begins as a dreamscape at the wonderful world of Disney and slips into a nightmarish romp through the uncanny and absurd. Jim White (Roy Abramsohn) is fired on the last day of his family vacation. Jim refuses to tell his wife the bad news and insists they enjoy their final day in the Disney theme park. A false sense of security prevails through the early scenes. The initial moments in Escape From Tomorrow feel like falling into a mid-century picture postcard. Idyllic visions of iconic imagery and smiling faces recall a time and place beyond reality. Eventually the dreaminess gives way to Jim’s affected perception: he experiences sinister hallucinations and obsessively follows two charming young French girls with the eyes of Humbert Humbert. The final narrative shift blends comedy and horror in a way that feels paralyzing. This nostalgic and strange story is necessary viewing for anyone interested in experimental film.