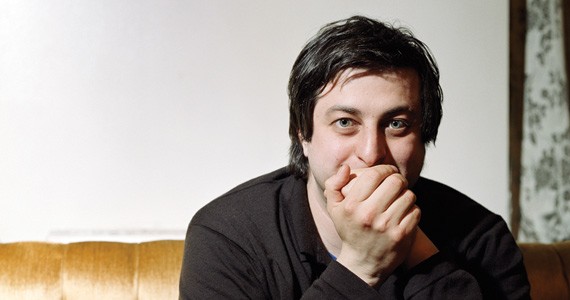 If Eugene Mirman gets screwed on his Delta flight from New York next week, the airline will hear about it.

In fact, he's known for his letters.

Once Mirman took out a full-page ad in the Greenpoint Gazette lamenting his woes with Time Warner Cable. In it, he wishes a series of plagues upon Time Warner's board of directors, including that "every board member's cell phone ring loudly announced their weight, and also the day they'll die."

Letters aside, you might know Mirman as the voice of Gene Belcher on Bob's Burgers, as mobster Yvengy Mirminsky on Adult Swim's Delocated or as landlord Eugene on Flight of the Conchords.

Mirman, 38, has been working comedy gigs since the summer after he graduated high school. He moved to Massachusetts with his parents from Russia when he was four. Comedian isn't the stereotypical career choice for a first-generation American.

"A lot of the other immigrant kids I know do more like hard science stuff. But I think actually for my parents, it was sort of important for my brother and I to get to do what we wanted, or at least try to do what we wanted. So they never pressured me to become, like, a scientist," he says. "Which is good because I had terrible grades."

He spent his youth watching comedy, and then one day something just clicked. He studied at Hampshire College, where he could "design" his own major in comedy.

Mirman's humour runs the gamut from deadpan confessional videos and anecdotal or observational stand-up jokes, to Gene's fart jokes on Bob's Burgers and Mirman's own self-help book, The Will to Whatevs. Or, as Mirman jokes, "somewhere between inventive and blue-ish."

What he really enjoys most is the variety of work he gets to do. But despite his full resume, including his current TV gigs, his weekly show in Brooklyn and his ongoing tour, Mirman still feels the pressures of being a freelancer: "I'm totally working and I think my parents are pleased with what I've done, but I don't think you ever, as somebody who sort of freelances, shake the idea that everything could fall apart."

To be sure,a stand-up career comes with its own workplace hazards, freelance stress being only one. The others are less conventional. "I once opened for a juggler who was juggling fire in a small club in this Chinese restaurant...and I think he dropped the fire," says Mirman. "And I think another time before I went on, someone had a seizure." After they ensured the person was OK, "It was like, 'Ladies and gentlemen, Eugene Mirman.'"

Mirman travels across North America with his stand-up routines, and has gone as far as Norway and the UK, and now, Halifax.

"You should expect I'm going to kill a live bird on stage---you should expect that. And then when those expectations are not met you should find it hilarious," says Mirman. "I'll drive a large car into an audience member's mouth...and then probably just joke about experiences that happened to me. Those are the three things you should expect."

Even though he didn't follow the other immigrant kids into science, he compares his craft to scientific method: create "a hypothesis you think will be funny, you go and you tell it to an audience and they maybe think it is funny, and then you tell it again and then people don't," says Mirman. So there's the rewriting and the re-performing of jokes, "and you just do that over and over until you're the world's greatest comedian."

According to the non-scientist, he's "87 experiments away."