European Pantry gets rejuvenated with a new generation of ownership

Gavin Meehan is combining the old school and the new in the store’s latest iteration – Finsbury Market. 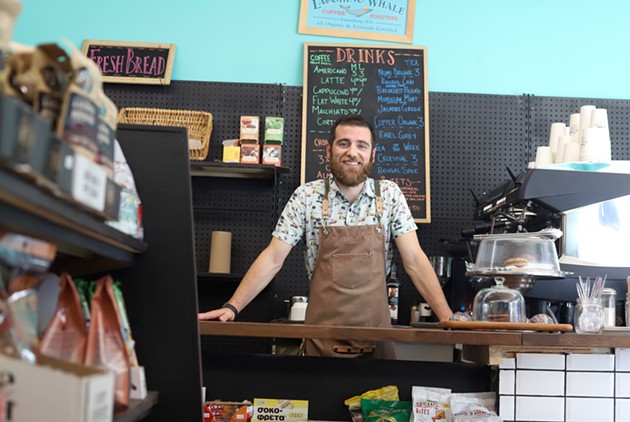 Victoria Walton
Gavin Meehan is the new owner of Finsbury Market, in the former European Pantry on Chebucto Road.
The corner of Chebucto and Elm streets in West end Halifax is the long-time home of a local store that has changed hands a few times over the years.

“In here, you can kind of tell there’s been a business here for 35 years, and I’m just the latest generation to take it on. It was a Greek shop and then the European Pantry and now it’s Finsbury,” its newest owner, Gavin Meehan, tells The Coast.

Meehan took over the former European Pantry at the beginning of September 2019, coinciding with Hurricane Dorian–what he calls a “baptism of fire.” “We lost the power to the walk-in fridge, so we lost a lot of product then,” he says.

And just six months later, the store endured the beginnings of COVID-19, remaining open during the pandemic thanks to a few loyal staff.

“We were selling a lot of take-out dinners and a lot of take-out sandwiches, basically just food for people to be able to go home and eat, and give them a day off from cooking during that month period where everything was full-on shut down,” says Meehan.

Sitting at a custom-made table⁠—crafted from a 200-year-old piece of elm wood and filled with coffee beans encased in epoxy resin⁠—in Finsbury’s new seating area, Meehan says he wasn’t always a shopkeeper. 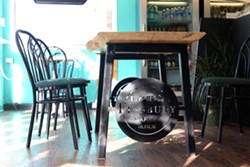 Victoria Walton
Finsbury's logo custom-made into the legs of a table in their brand new seating area.
Originally from Dublin, Ireland, he spent his former life as a hedge fund administrator before realizing the rat race wasn’t for him. “I came over here and I’d never heard of Nova Scotia before and I was just very keen to get out of Ireland and do something on my own,” he says.

After a quick stint as the manager of Open Book Coffee on Strawberry Hill, Meehan was looking to be his own boss. “[I] got that extra little bit of experience that gave me a bit of confidence to go out and do my own thing,” he says.

Already in the middle of another big purchase in his life, buying a house, Meehan took a leap of faith in taking over the store.

“The day we were closing I was just cruising Kijiji and I saw that the European Pantry was up for sale,” he says. “I said to my partner, ‘What would you think if I bought the European Pantry? It’s real close and all that,’ and she’s like, 'Are you fucking serious?'”

But he did it anyway. And in less than a year Meehan has converted the space into a vibrant storefront with hanging plants in the window, a turquoise accent wall, and to-go coffee and meals.

But he also hasn’t gotten rid of the things the Pantry was known for, like huge bottles of olives (and olive oil), imported cheeses, and fresh bread baked daily.

“I don’t want to be known as, like an English store or an Irish store, I just want to be a neighbourhood kind of spot where you’ll have a bit of something for everyone,” says Meehan.

The building itself is old and needs some tune-ups, but Meehan has spent some time discovering how that adds character to the space.

“It’s in rough shape, you know? There’s a lot of extra things that go on like leaks and the floor is all unlevel and it’s all slanted,” he says. “At the start, I just wanted that kind of clean look, and I’m glad I didn’t do anything because now I’m starting to love the disfigurements and the character of the place.”

In the coming months, the new owner wants to continue to bring new things to Finsbury, including a subscription-based cheese society. “I’m really going to try and build on the cheese because there’s nowhere really that’s known for cheese,” he says. “The next stage is this cheese society, which will be brand new cheeses that we’ve never had in the shop, and you’ll get like four of them, we’ll throw in a little extra bonus.” 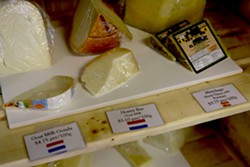 Victoria Walton
A small snapshot of the cheese at Finsbury.
During the pandemic, Finsbury sold a ‘mystery cheese bag’ that sparked the idea. “When everyone was getting a bit bored we were like, well what about we make like a mystery bag, nobody knows what’s in it, you don’t get to go 'I don’t like blue cheese,' or 'I don’t like this.' You just pay $20 or $30 for the bag, you get four cheeses, and you just gotta take the risk,” says Meehan.

He also hopes to continue to draw customers to the area around the store. Although it’s on a main artery, Meehan says not many people have set foot inside.

“Even my own neighbours didn’t know what the European Pantry was. Everyone’s kind of driven by the shop because of Chebucto Road, it’s so busy. But nobody even knew,” he says.

But the area, which he dubs “West End Central” has seen several new businesses open in recent years.

“We’ve got Scallywags [Barbershop] across the road. You’ve got Fries and Co., there’s a tattoo artist going in over there,” Meehan says, gesturing to the neighbouring apartment.

Although there’s a 55-unit condo being constructed next door, Meehan thinks it will add life to the streetscape with commercial properties on the bottom.

“I think this is a little hub that’ll hopefully grow, and as Halifax is growing it’s inevitable that the growth will seep outwards,” he says. "So, I want to put West End Central on the map."