The summer movie season is over, and though critics hated The Smurfs and Transformers, they were big hits. In response, Team Coast sounds off on movies they love that (almost) no one else does. 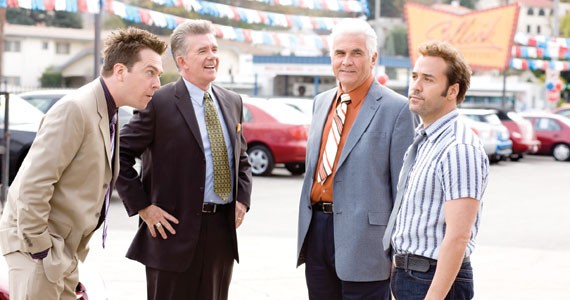 The summer movie season is over, and though critics hated The Smurfs and Transformers, they were big hits. In response, Team Coast sounds off on movies they love that (almost) no one else does.

Ishtar
It's telling that four of the five movies on this list are comedies; what's funny is the most subjective thing. Ishtar has become a synonym for Hollywood bloat---the most expensive movie of its day---but is actually pretty damn hilarious. Dustin Hoffman and Warren Beatty are talentless New York songwriters who get a gig in fictional North African nation Ishtar and are caught up in local power struggle, with CIA man Charles Grodin and local rebel leader Isabelle Adjani. The intentionally bad Paul Williams-penned songs are a highlight. A Blu-ray of the movie was supposed to come out this year. I'm still waiting. —Carsten Knox

Bubble Boy
It seemed critics just hated the idea of Bubble Boy. Arriving after a string of gross-out comedies (Tomcats, Road Trip, Freddy Got Fingered), a movie poking fun at a kid living in a plastic bubble seemed to be the final anti-human straw. But that sort of prejudice was what this bright, shiny 2001 comedy was really targeting. Born without "immunities," teen bubble boy Jimmy Livingston (Jake Gyllenhaal) escapes the clutches of his parents to openly experience the world---only to find everyone else has constructed their own social bubble. Bubble Boy's cartoon subversiveness isn't far off from where Tim Burton went in Pee-Wee's Big Adventure and its rebel optimism was the most perfect movie compliment to the mall-punk era. —Mark Palermo

Anything Else
Not every Woody Allen film has to be Annie Hall---and Anything Else, often hailed as one of his worst, doesn't aspire to be so. It does win, however, when pitted against your standard Hollywood rom-com---no small feat. Abandon your misgivings about American Pie star Jason Biggs in the Allen spotlight: bumbling Biggs, a wannabe writer in Manhattan, befriends a raunchy, old Allen, who becomes his mentor. Meanwhile, Biggs' love life is in chaos as he becomes entangled with Christina Ricci, hamming it up as an actress who knows two modes: seductress and neurotic. It's not cinematic genius---it's entertainment. —Molly Segal

Halloween (2007)
Considering the dearth of new ideas in most of the recent slasher rehashes, it's unfair that critics shat all over Rob Zombie for actually trying to do something different with his Halloween update. Zombie creates a distinctive world for John Carpenter's characters, setting the action in a milieu of profane, over-the-top trashiness and giving Michael Myers---a motiveless, reptilian stalker in the 1978 original---a humanizing origin story. Where Carpenter's Myers lurked in the shadows, moved gracefully and committed bloodless murder, Zombie's killer is a massive brute who bludgeons his way through victims. There's merit to both approaches, and Zombie's biggest compliment to the original Halloween is not trying to repeat it. —Matt Semansky

The Goods: Live Hard, Sell Hard
This will be the third time I've defended the qualities of this 2009 comedy in the pages of The Coast; in my original review, in a piece on movies that deserve cult followings and now. Discovered together, my boyfriend and I were invigourated by its crass energy and we skipped home from the theatre quoting choice lines at one another. "No one tells DJ Request what to play!" "Stripper stories always come in threes: college student, single mom, coke addict." This tale of a mercenary car salesman (Jeremy Piven) inspired little fondness in critics or audiences, but we keep a DVD on the shelf. The film's zippy vulgarity has restorative properties. —Hillary Titley