Everything has a place and a purpose in this Waverley apartment

A little bit retro and majorly minimal, this Rachael Shrum’s apartment makes a case for living with less stuff.

R achael Shrum has an organized mind but she's quick to point out that she's not really a tidy person. Sitting on her massive forest green couch in the morning sun she says, matter-of-factly, "I just leave stuff around." You wouldn't know it, looking around the tucked-away second floor, two-bedroom apartment she affectionately calls the treehouse. Sparsely decorated walls, meticulously stacked books and perfectly manicured plants give the space a feeling of calm, cool and collected. Or, as Shrum puts it, "everything I own has its own place or purpose."

Her Waverley home—a convenient stroll from Shubie Park—has been just that for two-and-a-half years. Since March, when the NSCAD grad left her day job to take her photography full-time, it's been her workspace too. Shrum says she's made it her own slowly, lucking out with lots of hand-me-down furniture and splurging on stand-out items that complement her subtle style and the shades of blue and green that trickle throughout the space.

"The really simple, minimalist vibe was really calming when I came home. This room is an exception, it shows my eclectic side a bit," she says of her living room, with its massive fern, hand-hooked pillow portrait of her childhood dog and a TV she never watches. Now, in the thick of wedding season (she's shot 14 already) Shrum spends most of her time in the room she's made her office. There she finds quiet inspiration from photos of the ocean and a shelf decorated (neatly) with vintage cameras and old oil paints inherited from her great-great-aunt.

"She painted a lot. There's a bit of painting in my family on both sides," she says. "That's what I started school for but I totally got immersed in the dark room and then stayed in there. Sometimes something just clicks and you go for it."

Considering she's a creative, Shrum keeps the flourishes to a minimum. Just one of her own photos—a foggy portrait overlooking the Halifax Harbour—hangs in her kitchen while a small, vintage snapshot of her grandfather at 20 smiles from the wall outside of her bathroom. Her all-white bedroom (save for the blue curtains she says "make me think of a Monet painting") gets a touch of whimsy from a handmade paper wall-hanging. It's the little things, and the spaces between them, that make the space serene.

"This apartment isn't super new or nice, but I've tried to make it mine," says Shrum. "I'm really conscious now of what I own. And if i don't need it I give it away or give it to a friend. There's not much in here that's extra." 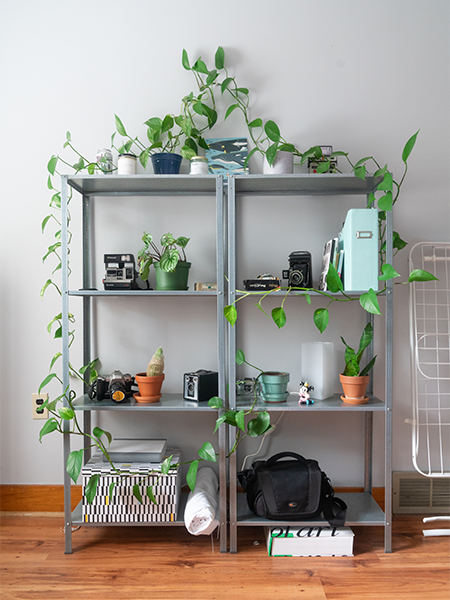 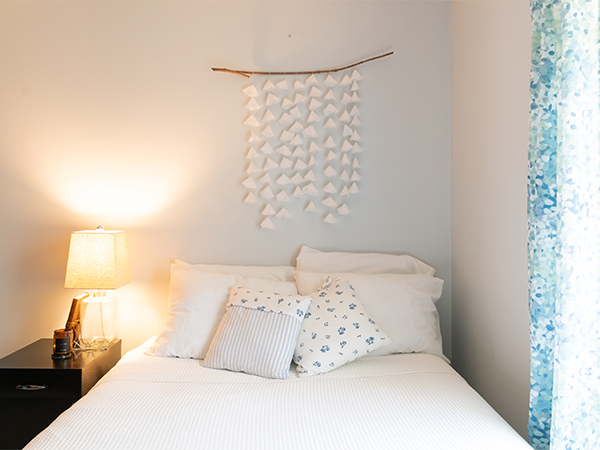