Another Evolve has come and gone. As usual, it went by way too fast, and as usual I'm grungy and chunks of dirt and food are still falling out of my hair (after two showers!) But my head still feels like a mellow, happy swamp. This year is probably the busiest and craziest Evolve I've ever been to, but for the most part, the extra bodies actually contributed to the festival's vibe rather than detracting from it.

As mentioned previously, I'm a terrible photographer, so if you want to see real photos by real photographers, please head over to Noisography or funkfactor.com. However, if you're looking for flippant remarks, ill-timed exclamations and ribaldry, get over here.

So this year my traveling companions and I decided we should go up to the festival grounds on Thursday. After our annual Giant Tiger stop in Truro, the sky darkened and by the time we hit Antigonish, it was pouring. We had neglected to pick up umbrellas and/or ponchos at the GT (although we did pick up many varieties of chip). So we joined the group of devil-may-care campers in the grassy bank reserved for "early camping" and set up our tent in the muck, getting drenched. We warmed up under a strategically-arranged tarp and proceeded to drink watery beers while the kids around us whooped and hollered. Bless the youth for their positive attitudes.

The dappling glow of the morning light, framed through the previous evening's soupcon of dew, heralded a day of enchanting sunshine and devastating, ball-shrinking heat. Friday is Evolve's busiest and most physically taxing day. You have to haul all your camping shit up the hill and then you have to set up your campsite, tent, and, if you're feeling ambitious, a giant flagpole:

See how high it is? It broke.

Anyway, then it was time to get to the serious business of drinking more beer and figuring out what to do for the evening. Excuse me for some small conflict-of-interest business, but I must mention my friend Rekkid Bitch Mike, who performed his first-ever DJ set at Evolve at 4pm and confidently drew a crowd into the Yurt, like he was the Pied Piper of jungle. Also, he dressed like a cross between Mad Max and a janitor. Good work!

I had meticulously printed and highlighted a schedule two days early and sealed it in plastic so it wouldn't get wet. "I brought a schedule, I'm totally amazing," I said to my friends. Then I went to the bathroom and lost it. So we went to see Skratch Bastid.

To be perfectly honest, I am iffy on Skratch, namely because I've seen him play the same set at Evolve a number of times. A Tribe Called Quest has a lot of songs besides "Can I Kick It?" - you know what I mean? So I walked up to the Synergy Stage feeling skeptical. Then someone told me he had some ladies working a stripper pole onstage. I was prepared to be very "Ugh, really?" about this until I actually watched the ladies, who represented a dance studio (I couldn't read the text on their shirts) and were amazing. Then Skratch did a cool thing where he mixed Tom Morello's wah-wah guitars on "Bulls on Parade" with Rhianna's "wah-wahs" from the bridge of "Rude Boy." Clever!

These two older gentlemen, dancing at the back of the tent, were in the running for Having the Best Time:

We then strolled over to the main stage to check out Carmen Townsend. There was a girl hula-hooping on stage with the band. I couldn't tell if it was planned or if she had simply leapt on (this happened a lot throughout the weekend).

Then she left and Carmen launched into some tunes from her debut album Waitin' and Seein', sporting her band's brand-new drummer Steve. While the band appeared to be playing well and Carmen's voice sounded strong as usual, there was something off in the mix - the sound kept coming in and out. The lights were also weird - they kept coming on at strange times, and didn't align with the rise and fall of the music. Maybe she was a guinea pig for the rest of the night? Carmen soldiered through and even covered the Beastie Boys' "Sabotage" with surprisingly great aplomb, but in the end, things still sounded off, and that's a shame.

Fred Penner performed a 15-minute opening set for Man Man, which was completely perfect. He led the audience through some stretches and pep talks, performed "The Cat Came Back" (featuring a giant chorus of "Miaows") and Pete Seeger's song "Garbage." I don't know what else to say about Fred Penner - it was just very delightful. The same tricks that work for kid audiences also work for audiences of hippies. Just make them repeat what you say, raise their arms and make animal noises. All bands should do this.

Then Man Man came on and my heart proceeded to break. COMPLETELY. The sound problems that had plagued Carmen's set had returned tenfold. I am told that the person doing sound for their set had only an hour to set everything up, which in my limited understanding isn't really sufficient for a band that plays about 40 instruments, screams, sings in falsetto, makes baby noises and depraved cackling noises.

Look, I don't know much about doing sound, and I understand there are mitigating factors when you're putting on a festival in the middle of a valley, but that band worked REALLY hard to put on a good show, despite the fact that they were mostly shrouded in darkness (no spotlight on the lead singer when he grabbed the microphone, no light on the drummer when he did a solo, etc) and their sound and lighting remained wretched through their entire set. There would occasionally be moments of glory - "Engrish Bwudd" sounded particularly great - and once we moved up front, the pure spectacle of Man Man eclipsed the miserable mash of the audio. They screamed, they danced, they looked insane, the drummer was relentless, and the lead singer Honus Honus put on a raincoat and acted like a giant pervert.

Then we saw Pretty Lights, who had great sound and pretty good lights, doye! 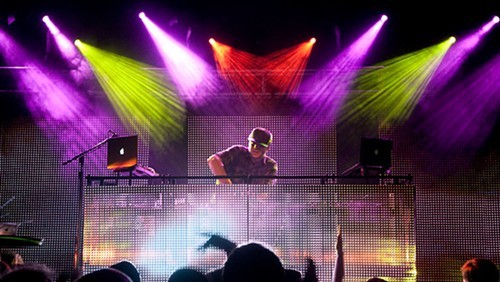 (Obviously not my photo)

So remember how I said i know nothing about DJs? I went back to my tent and surveyed the group about Pretty Lights. About half the people at my camp insisted Pretty Lights is unmissable, while the other half were like "Yeah, dunno, he's kinda boring." I can see the validity of both camps. At his essence, Pretty Lights is just a dude playing heavy electro beats with two Macbooks while his giant lights and speakers bedazzle you. On the other hand, sometimes it's really nice to be bedazzled. Also the guy was having the best time up on his riser as he twiddled back and forth between the Macbooks. I've actually never seen any DJ having as much fun as that guy. Jumping and yelling, messianic poses to the sky, tipping his hat, pointing, more jumping. And the crowd was massive. It was good and simple fun.

Then we went back to camp and ate chips! Part Two comin' atcha!