Geneviève Brideau and Parker Houghtaling “hope to centre a multi-sensory experience in their talk.” 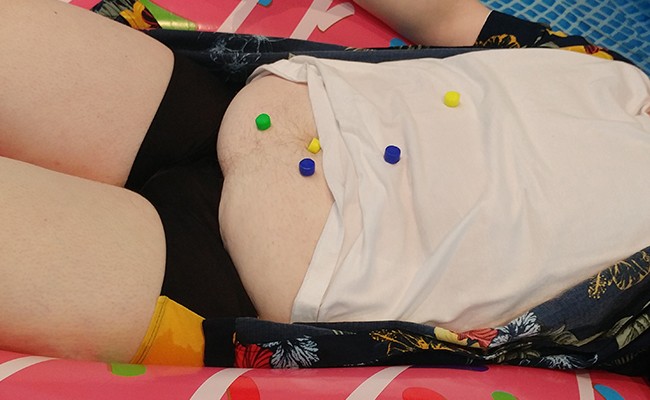 Geneviève Brideau & Parker Houghtaling, ARTFAT—Taking our fat bodies back from the clutches of semiotics
Sunday, July 23, 2pm
If you self-identify as QTBIPOC, POC and LGBTQ2SIA+, and want to sign up, email  fun@eyelevelgallery.ca

"It's an artist talk, but it's also an artist-listen," says artist Parker Houghtaling, grasping at words to describe his latest project with frequent collaborator Geneviève Brideau. Their collaborative talk ARTFAT—Taking our fat bodies back from the clutches of semiotics aims to achieve a sort of subversion: A space for listening instead of talking, for removing layers of semiotic meaning instead of adding them, for touching art instead of simply looking at it.

It's the first in a series of three talks in Eyelevel Gallery's Food For Thoughts project that aims to disrupt traditional Western notions of how an artist talk should be. After beginning with a primer on fatphobia, Brideau and Houghtaling hope to centre a multi-sensory experience in their talk that better represents their understanding of fatness.

"I think touch is the sense that's most important to both of us," says Brideau, nodding to their partner.

"Because when fat representation in artwork is concerned, it's always about the look," continues Houghtaling. "People don't tend to consider fat bodies through touch, but that's our primary experience of fatness."

The artists also acknowledge that their talk falls during Halifax Pride—in a way, it pushes back against an increasingly narrow image of what it means to celebrate queerness. Camila Salcedo, currently working with Eyelevel to curate Food For Thoughts, says this overlap is completely coincidental but affirms the mission of the series.

"The idea of an oral history and the idea of an open conversation is quite different from a regular artist talk," says Salcedo. "And conversations around fatness and queerness are so important to have, and I feel like there hasn't quite been a platform for that."