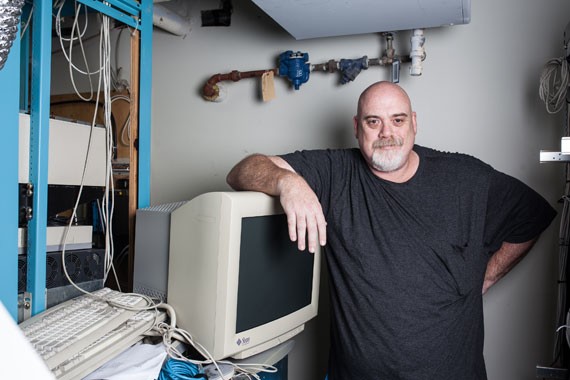 In the heady early days of the internet, the players were few. But among that small group, there was one pioneering Canadian province: Nova Scotia—the first place in the country where the internet was widely available.

On face value, we’re still doing well. In Nova Scotia, broadband internet is technically available to 99 percent of the population. But scratch beneath that surface, and a different picture is revealed.

According to 2012 Statistics Canada data, the percentage of people in Nova Scotia actually accessing the internet hovers at around 79.3 percent; for those making less than $30,000, that drops to 55.2.

In reality, high-quality broadband only exists for the much smaller percentage of the population that can pay for it, an imbalance often called the digital divide.

It isn’t as if Canada as a whole sets a stellar example—in fact, a 2013 report by the OECD ranked Canada amongst the 10 most expensive countries in the world for broadband access. As prices drop for faster internet connections globally, speeds in Canada go up along with prices.

But even amidst the less-than-inspiring precedent set by the other provinces, Nova Scotia ranks among the lowest for internet access. So what happened? When the time came to develop internet capacity in Nova Scotia, a partnership forged between Dalhousie and a private company came to the fore—and the first public internet in Canada was born.

“This caused a little bit of consternation in the other provinces, because it was completely different from what they were doing,” says John Sherwood with a chuckle.

Sherwood was a key player in the development of internet capacity at Dalhousie. Though he saw the evolution first-hand, Sherwood says back then, he didn’t think it would expand much beyond that initial academic network.

But expand it did, and within a few years, two private companies were gatekeepers to the magic of public internet—the same two companies that form the effective internet duopoly that exists in the province today.

Although Bell Aliant and Eastlink control the commercial scene, a different way of delivering internet is also out there. As public internet access sold by for-profit companies was developing in the 1990s, another model was in the works, appropriately titled the freenet system. Halifax was one of the first cities to get a not-for-profit internet provider—Chebucto Community Net—and also one of the few places where a freenet still exists.

Chebucto is a small outfit—an underdog, even. For evidence of this, look no further than Chebucto’s own office. Tucked in a subterranean corner of Dalhousie’s mathematics building, it’s piled high with aging technology, except for a new monitor on which Andrew Wright, the office manager, monitors the network full time (on part-time pay, he says).

Across the hall, Wright opens the door onto an air-conditioned room filled with high-tech tower servers. It looks impressive—and then Wright points behind them, to an older tower topped with what looks like an elderly desktop computer.

“This is our server.”

From here, Chebucto connects to a transmitter atop one of the university’s residences and beams low-cost, high speed broadband to Joe Howe Manor, H.P. McKeen Manor and imminently, to other manors in the north end, charging customers just $125 a year.

Chebucto’s high speed isn’t broadly available, partly because the internet infrastructure it would take to offer wide-ranging high speed connections is expensive to install—like, $25,000 per kilometre of fibre-optic cable expensive.

That’s one of the reasons large telecom companies were able to take so much market share in the first place, says Wright—they had both the material resources and the political capital required to marshal the necessary funds.

That expense is also why it’s so hard for a third party to enter the market. Although internet resellers do exist, they’re renting cable from either Eastlink or Bell. In other words, the main telecoms set the price. And without viable competition, they’re under no real pressure to step up their game, says Wright.

The story of internet in Nova Scotia is, on some level, one of lost opportunity. But having lost this opportunity isn’t just an inconvenience. With everything from job and apartment searching to education, banking and government services moving online, falling on the wrong side of the digital divide means being cut off from important aspects modern life, says Katie Campbell.

Campbell’s gone without internet out of necessity in the past, and says that bridging that gap isn’t as easy as going to the nearest cafe or library—there are privacy concerns, not to mention the costs associated with being out in the world, whether that’s bus fare or the price of a cup of coffee.

Yet there might be some hope on the horizon. In 2014, an internet exchange was established in Halifax. Organizations around the province who are peers on the internet exchange don’t have to pay to link up to one another, resulting in a more direct flow of information—meaning faster and cheaper connections. Internet exchanges could, in theory, bring the cost of internet down in the long-term.

The HRM is also in the process of developing free public wifi. Municipal wifi is an integral piece of city infrastructure in the same way as sidewalks and streets, says Jim Kirk, manager of ICT Transformation with the municipality.

As cities turn into cyborgs, a wireless network will be necessary to connect everything from smart parking meters to smart traffic lights.

It would also be a resource for tourists, which is one reason why, at least initially, the wifi will be concentrated around tourism hot spots such as the Halifax and Dartmouth downtowns.

Kirk says they’re in negotiations with respondents to the Request for Proposals—which asks for a fully managed service, meaning that the city wouldn’t actually own the network—and will go back to council with recommendations this fall.

But both of these steps, though important, have been taken elsewhere. Six hundred cities have internet exchanges, including six in Canada, and free municipal wifi has been around—in Fredericton, for example—since 2003. What would it take for Nova Scotia to once again be ahead of the game?

In 2011, a United Nations report declared it a human rights violation for countries to block their citizens from accessing the internet. A small minority of countries—comprised of two tiny nations—has taken this one step further, mandating not only freedom from interference, but minimum standards of access for all citizens.

These kinds of rights are a tougher sell, says Jon Penney, professor at Dalhousie’s Schulich School of Law, but that doesn’t mean they couldn’t be introduced here.

One way would be to have more robust standards of service written in to contracts the province has with internet providers, he says. Another, more pioneering route, would be to make access to internet a statutory right, through legislation that mandates core principles of access such as minimum connection speeds or a baseline for affordability.

It isn’t a necessarily a likely step for the provincial government to take, says Penney, but it would be an innovative one: “We’d be up on the Wikipedia page with Estonia and Finland.”

That return to leadership would be an exciting thing to witness—provided, of course, you could get on the internet to see it.