By Stephanie Johns and Allison Saunders 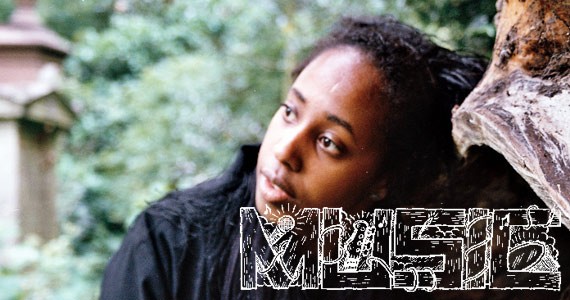 Cold Specks is one of the many artists you can catch at the Halifax Pop Explosion, October 16-20.

CKDU Funding Drive
To September 30, various locations fundingdrive.ckdu.ca
Funding drive season is so chock-full of awesome stuff to do and see that sometimes you forget what it's actually all about---keeping our sweet, sweet community/campus radio thriving. In honour of their 28th funding drive, the fine people at CKDU are looking to raise $28,000, which will help revamp their production studio. To show your support via cash money give the station a call at 49-HAPPY, or better yet, do it in person. This weekend CKDU offers daily events just as diverse as their programming with a good old fashioned talent show, well-crafted words from the best local poets, an '80s inspired homecoming dance, a union of music and waffles and live tunes at Fairlanes for the annual fave Halifax is Bowling. See pages 27 and 42 for full event details, and don't forget it takes a community to keep community radio alive. --Allison Saunders

Keith's Birthday Party
Friday, October 5, Cunard Event Centre, 8pm, $10, keiths.ca/birthday
Let's just get real for a second. You probably like beer. And maybe you've even felt a pang of hometown pride when you've seen Keith's being stocked at a faraway bar. Whether the above statement apply to you or not, there's no denying this fact: Alexander Keith is turning 217. It's a $10 birthday party, and Alan Doyle, Dwight D'eon and Adam Driscoll, Paul Lamb and Wreckhouse are going to try their darndest to give you your money's worth at Mr. Keith's birthday bash. They also promise food. And more beer than you can shake a stick at.

Halifax Pop Explosion
October 16-20, various locations, halifaxpopexplosion.com
Our little Halifax Pop Explosion isn't a teenager anymore. This year marks the 20th time our city's been treated to a festival full of first class programming, shows that'll make you count down the days and loads of bands that normally wouldn't come our way. Ah, to be twenty. When you're still youthful and spry but starting to figure out the big picture (or at least you're supposed to be). In the case of the wise-beyond-their years HPX, it was all figured out a long time ago. "Peter [Rowan], Angie [Fenwick] and Shelly [McPhail] started it all because they were frustrated that the bands they were working with weren't getting due recognition," says Jonny Stevens, HPX's executive director. "So they said 'We're going to book our bands' heroes and put our bands on bills with them.'" And so it goes. Since then this annual international music fest (and conference) has been bringing your favourites to town every fall for a few days of crazy good times. So what do you do for a birthday this big? Bring Deer Tick, Purity Ring, Black Lips, Of Montreal, Cold Specks, Zola Jesus and YAMANTAKA//SONIC TITAN to town, plus reunite the likes of The Super Friendz, Cool Blue Halo, Hip Club Groove and Stratejackets. And that's barely scratching the surface. "The thing I love most is not being inside of the room, but seeing the people leave sweaty, smiling and happy," says Stevens. Make sure to give him a high-five on your way out. --AS

Nova Scotia Music Week
November 8-11, Liverpool, NS, nsmw.ca
The nominees have been announced, the rooms have been booked, the outfits have likely been picked out. Nova Scotia Music Week is not only a good chance to give deserving musicians and industry pros a pat on the back, but also a good introduction to a cross-section of the scene for newcomers. Galas, awards, songwriting circles and showcasing artists such as Kayo, Paper Beat Scissors, Jennah Barry, Kuato, Jenn Grant and lots more, might well entice you to leave the box sets at home and set off to Liverpool for a music-filled weekend. Wristbands for a fan looking to check out the showcasing venues (over 100 performances) are a mere $24.99. --Stephanie Johns

More, please
Metal, Celtic, classic rock, tributes to everything? Whatever, man. Fall is about pushing yourself to try new things. Pumpkin maple everything is easy but pushing your musical boundaries is more rewarding. Halifax's own Iron Maiden tribute band, 2 Minutes To Maiden, are celebrating their eighth anniversary with unwavering Maiden love at Michael's Bar and Grill (October 13, 10pm, $8 with Hero's Last Rite, The Bombing of Dresden). Are either of your parents born in the fall, perchance? Treat them with Starship (October 19, The Schooner Showroom), The Australian Pink Floyd Show (October 30, Halifax Metro Centre) or Gypsy: A Tribute to Fleetwood Mac (November 9 at the Halifax Forum), because you have probably put them through hell what with your tattoos and plugged ears.

Re-Jigged: A Celebration of New Celtic Music & Dance just might convince you to give into it already and enjoy fiddles. Taking over Ochterloney Street on Saturday, October 20, the event features new-trad Celtic heavy-hitters like Mary Jane Lamond, Wendy MacIsaac, MacCrimmon's Revenge and more. Symphony Nova Scotia offers you a chance to feel really smart with their pre-Haydn's Creation concert chat with the Nova Scotian Institute of Science (October 6 at 6pm Dalhousie Sculpture Court). It's a precursor to SNS's 30th anniversary and in celebration of the Nova Scotian Institute of Science's 150th anniversary. Enthralling, if a bit heavy for a first date. ­—SJ

Fall Arts Preview: Get lit(-erary) with these events