Falling through the tenancy cracks

One of the city’s largest rental companies asks non-Canadian tenants to pay rent in three-month increments—a direct violation of the Tenancy Act. 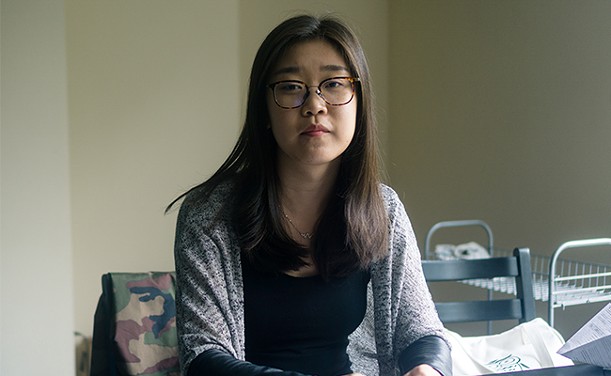 International students in Halifax say they’re being taken advantage of by one of the city’s largest property rental companies, which seemingly as official policy uses leases in breach of the Tenancy Act for non-Canadian tenants.

Jianing Xu says she was asked by Killam Properties to pay rent for her Cathedral Lane apartment in three-month increments. The odd payment agreement is explicitly illegal under Nova Scotia’s Tenancy Act. Landlords are not permitted to charge people more than one month’s rent at a time, no matter what a signed lease agreement says.

According to Xu, Killam said the rent arrangement was due to her being an unknown risk. “‘We don’t know you and you don’t know us,’” she says she was told.

Since leaving China to move to Halifax three years ago, the 21-year-old has been studying finance and global management at Saint Mary’s University. But Xu was told by building manager Charles Bruce that he was worried she could go back to China anytime and skip out on rent.

The Coast learned of at least four other Chinese students in Halifax that had this same kind of three-month rent agreement drawn up with Killam, two of whom live in the same building as Xu. The SMU student says she’s personally spoken with others in similar situations, each one with varying rental agreements that all include paying more than one month’s rent upfront.

Dan Sampson, Killam’s director of property management, didn’t believe these kinds of rental arrangements were in breach of the Tenancy Act, or that they disproportionately affect international students.

Killam requires a credit check to be performed for a lease application, explains Sampson. Since international students don’t have social insurance numbers, the company allows for a Canadian co-signer. If that isn’t possible, Killam asks for a chunk of rent upfront and a more secure payment structure.

“We can make agreements with tenants in order to secure tenancy that fall outside the Act as long as both parties agree to it,” says Sampson. “If there is a dispute then we will revert back to Tenancy.”

That’s false. Asking for more than a month’s rent and drawing up a lease that isn’t allowed under the Tenancy Act is grounds for complaint, says Dean Johnston, director of residential tenancies with Service Nova Scotia.

“The Act is very specific in that a landlord and a tenant are not permitted to contract outside of the Act or in contravention of the act,” he says.

Johnston, whose job is to mediate disputes between landlords and tenants, says he’s “had complaints the program before on this.”

Confronted with this information, Sampson reneged on his previous statements and acknowledged the rental agreements are in breach of the Act. He says any tenant who brings a formal complaint about the payment structure to Service Nova Scotia will have it changed back to a one-month amount.

During The Coast’s investigation into this story, building manager Charles Bruce knocked on Xu’s door and told her the payment structure would be changed to the legal one-month of rent at a time. The news came as a surprise to the tenant.

“It was changed because she indicated to [Bruce] that she couldn’t do that. She couldn’t pay the rent in three-month increments or she didn’t want to because she thought it was unfair. And then she went to the media,” explains Sampson.

The Killam director claims disputes of this nature have never happened before during his 14 years with the company. Most tenants accept the three-month pay structure, or at the very least don’t make a complaint about it.

But this isn’t the first time Xu says she’s had bad experiences with landlords in Halifax. She feels disrespected some of the time because she is Chinese. Landlords have made her feel that “‘We don’t really want you guys in, but we don’t want others to think that we have a stereotype about international students,’” she says.

No other company has asked her to pay in three-month increments. Xu says the high cost worried her, but she signed the lease anyway because she was worried about finding a place to live in time.

Things got worse from there.

On the day she was getting ready to move, just 30 minutes before the bank closed, Bruce told her she wouldn’t be able to move into the new unit without a cheque. Xu says she had already asked and been given the go-ahead to use a pre-authorized bank payment form, which would have allowed Killam to only withdraw one month’s rent at a time.

“He was so rude to me, and he yelled at me,” she says, adding that it costs her seven dollars every time she gets a cheque from the bank.

Bruce has been working part-time with Killam for three years. He’s also a Halifax Regional Police officer of over 25 years. He denies being rude to Xu on the day she moved in but doesn’t remember specifics about their conversation. “Yes, at one point I may have been a little [stern],” he says. “This is my job.”

He also says he told Xu from the beginning she needed a cheque to move in. The language and cultural barrier may have made for miscommunication, says Bruce. He wishes it had gone differently.

“There’s learning on both ends.”

Both Bruce and Sampson maintain that everything is transparent in Killam’s lease agreements, however, Sampson says the forms don’t pro-actively mention that some of these payment structures are in breach of the Tenancy Act. He also points to Xu’s cheque story as an example of the risks of renting to her.

“She’s indicated that she didn’t want to spend seven dollars to get a certified cheque upfront to give us, and she’s in a luxury unit that’s over $2,000 a month,” says Sampson. “So I’m a little concerned.”

Sampson was unable to provide information on how many non-Canadians have suddenly left or skipped out on rent from Killam properties. Killam Apartment real estate investment trust has around 15,000 tenants across Atlantic Canada, Ontario and Alberta, with about 6,000 living in HRM.