Calgary’s Sophie Farewell move mountains with However you do it... consider the stars for Nocturne. 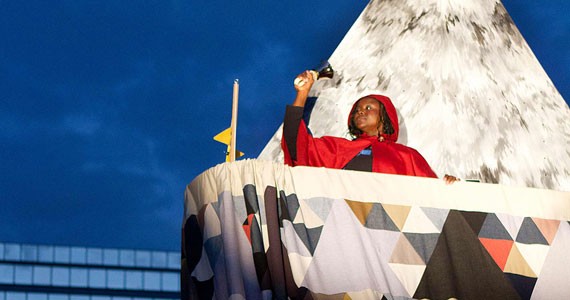 We all have a basic understanding of the deal. You hit send on a text message, it travels through the atmosphere, gets triangulated by a satellite or a tower and hits your intended destination. LOLs ensue. Calgary's art collective Sophie Farewell wants to add a step to this time-honoured process.

The large-scale sculptural installation However you do it...consider the stars will be hard to miss as you're traipsing the city in an art haze this Saturday night. Featuring giant mountain and moon structures on scissor lifts some distance away from each other, your messages make up a crucial part of the piece. Each structure holds a town crier, and your intended messages are ferried up to them and shouted from the mountaintop (or moontop, as the case may be).

"We wanted to create something visually spectacular but linked to some of the underpinnings of our practice," says Eric Moschopedis, who makes up the collective with Mia Rushton, Heather Kai Smith and Shawn Dicey. "With However, it's really about who has the right to speak in public. The politics are thinking through public spaces and how we can talk and generate dialogue in that space."

The various backgrounds in Sophie Farewell (music, painting, performance, illustration and craft) came together to create the piece, which was commissioned by Nuit Blanche Calgary as the group's inaugural piece last year. One of this year's anchor projects, However has travelled to Charlottetown, Sydney and Atlanta, auditioning locals for the parts of the town crier. More than anything else, they say the piece is about giving a voice to the citizens.

"In Calgary, the mountains and moon sort of act in dialogue with one another," says Moschopedis. "In and of themselves they are large sculptural pieces that happen naturally in our part of the country anyhow. We also use them as things people look to for sublime offerings or oracles of some sort. We wondered how can we use the metaphor for the moon and mountain as delivery systems or a way of giving a voice to people of the city."

This idea is also reflected in the romantic title. "Historically we've used the stars as navigation; to lead us places," says Moschopedis. "How can the messages yelled out to the crowd act as navigational tools for possible futures by identifying the immediate present?"

The juxtaposition between the permanence of the moon and mountains, the formality of a town crier and the impermanence of a hastily jotted off message ("Erica, please meet me at home at 11:45, bring beer") add up to a playful and engaging experience.

"Sometimes people hang around for an hour just to hear messages called out," says Moschopedis. Their only edits will be to messages including hate speech, otherwise you can let fly with your soapbox rantings both silly and profound. "Come the end of the night the messages get more rowdy and grotesque," he says. "If you were to see the messages over the course of the evening it's possible to start piecing together a narrative of who's in the crowd and what people are thinking but it's not an exact science by any stretch. Because there's so much flying at us it's difficult to process. Many are universal in scope, like wishing for world peace–they are oftentimes the least interesting messages to receive. Messages from kids are almost exclusively the best. For kids to take that responsibility and to have that space, that's fantastic–as opposed to the drunk assholes, that's when we're just cringing."

Halifax, I know we like to party, but think of the children (and be inspired). "A large part of the project is that everyone has to take responsibility. Because the messages are anonymous when they're called out people start looking around like, 'Who said that?'" says Moschopedis. "So there's a sense of group responsibility for what's being said in a public space."

The limited amount of time also underlines the "please no trolling" caveat, so take full advantage of this magical project and absorb what the city has to say.

"It's a slow project. There's text messaging which people think is an instantaneous experience but the town criers only call out a message a minute, not everything gets called out–we don't have time," says Moschopedis. "There's something interesting about the instant gratification of a text message being slowed down at a snail's pace. For us, there's an esthetic decision to keep it slow and methodical, it becomes almost ritualistic in a way."