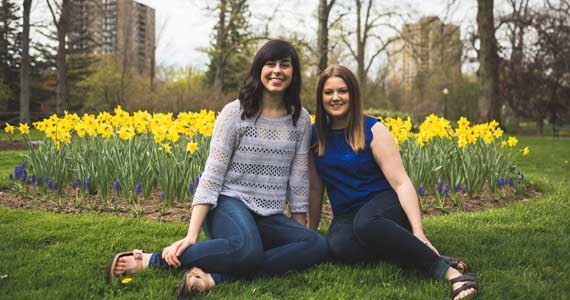 It seems nothing really jogs the mind into creative thinking like an apple falling from a tree. Legend says it's what inspired Newton to dream up his law of universal gravitation, and it looks like the innocent apple has struck again—this time closer to home.

We're talking about FOUND, a brand-new Halifax-based start-up looking to tackle the issue of food waste. For starters, FOUND is setting up a compendium of urban edibles. Let's say you have a crab-apple tree on your property that drops tart little fruits all over your yard each year. Instead of cursing as you run them over with the lawn mower, you can call up FOUND and it'll send volunteers to come gather them so they can be shared with local food banks and shelters.

"You'd be surprised how many apple trees, wild berries and other edibles grow, and go unused, in urban areas," says Lindsay Clowes, the organization's co-founder. "If you have a tree or a bush on your property that's producing food, let us know!"

FOUND isn't only interested in picking up your wasted edibles, it's looking to develop a network that brings perfectly safe and tasty food that would go otherwise unused to the plates of those in need.

Laurel Schut, the other half of FOUND, says food gets wasted in many ways, and it's usually not intentional. She says sometimes food products just don't make it to market, but they're still fine to eat.

"That's where we come in. We're looking to make connections with local farmers and farmers' markets so we can collect these forgotten foods and repurpose them," says Schut. "What we can't deliver fresh to our partners, we'll prepare into shelf-safe options, by preserving, flash-freezing and dehydrating what we can."

Clowes and Schut came up with FOUND while studying resource and environmental management at Dalhousie. During the program they both worked on different projects around the province where they saw the opportunity to do something with the food that got left behind in the system. Drawing influence from Ottawa's Hidden Harvest program—which claims to have rescued 15,000 pounds of previously wasted urban edibles in the last four years—the FOUND duo was surprised there wasn't a similar operation already running in Halifax.

"Everyone we've shared the idea with has had the same response: How is that not already happening?" says Schut.

With a snazzy new website, Clowes and Schut, just three weeks out from graduation, are both plunging into FOUND full time and are hoping to have their food-sharing network operational by the fall of this year. Between now and then they're going to be busy, and are certainly open to anyone who wants to help.