Feed your soul at R&B Kitchen

From oxtail to rasta pasta to sweet chili shrimp, the Caribbean spot dishes up daily delights. 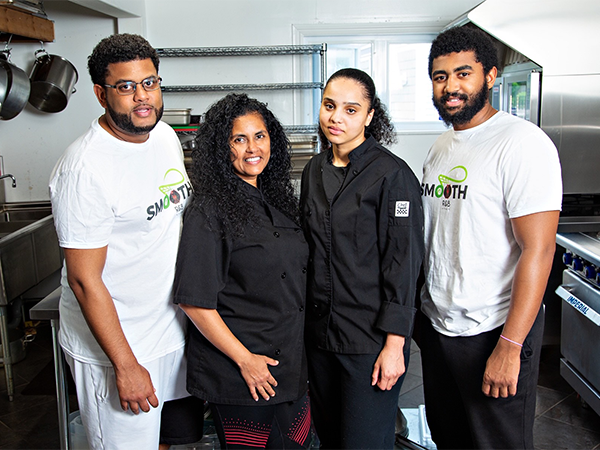 The simple idea of "let's sell plates" is what's behind R&B Kitchen, a soul food restaurant in Dartmouth with just one main dish per day.

"The main thing we focus on is one, that we love R&B music and two, that we love food and soul food," says co-owner Nevell Provo.

The idea behind the daily menu is to keep people excited and guessing, like how Provo always had to guess what his mom was going to make for dinner when growing up. "I never knew what she was making that day. I just had to kind of wait and hope," he says.

Provo runs the business with his family and girlfriend, Raemiah Dorrington, who is the head chef.

Dorrington says she enjoys the liberty of being creative with her menu. "We can pretty much use our imagination and just make anything that we come up with," she says. One ingredient she often relies on is onions: "I love them," says Dorrington. "They're so versatile so you can do so much with them."

The kitchen opened in February, only one month before COVID-19 hit Nova Scotia. But it was able to keep things moving during the pandemic. "We hired more delivery drivers and really got our messaging out to social media," says Provo. "We actually grew during COVID."

Part of that growth is thanks to one meal customers can't get enough of. "Oxtail Friday is our busiest day. We didn't know if it was because it was Friday or because it was the oxtail." , Provo says they don't want to risk finding out.

Provo, who also manages R&B Kitchen's social media, says customers ask to bring back some menus. "We're hearing what people like and what they don't like," he says, adding that a lot of planning goes into making the menu. It's planned one or sometimes two weeks ahead of time.

When R&B Kitchen first started out, they expected to sell about 20 to 30 plates in a day, but now are serving up to 150 plates daily.

Provo says running this type of business is busy and stressful but he's not complaining. "That piece of excitement and really giving people that spark is worth that extra work that we have to do on our end."