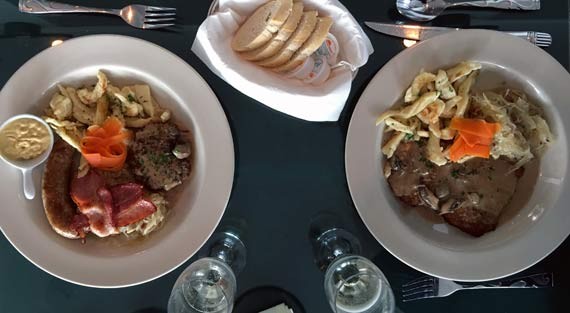 Somehow La Cave de Strasbourg has just never been on my radar. Probably because it's in Fall River, which, frankly, only pings my radar when I'm on a bus to the airport. Sorry, Fall River. I have failed you. And, frankly, I now realize that I have failed myself.

For the record, I love Strasbourg. (And I guess I could say that I'm not anti-cave.) I went there last year and fell absolutely in love with the city. I Google search other Alsatian vacation destinations on the reg. I'm a regular Alemaniac. (From the root word Alemannic, used in the sentence "She is really stretching with a pun based on the world Alemannic.")

Alsace bumps up against the Rhine on the eastern coast of France bordering Germany and Switzerland. This makes it incredibly easy to find sausages and great beer in quaint Franco-German towns like Strasbourg, where cobbled streets feature medieval architecture, towering Gothic churches and timber-framed storybook houses overlooking the River Ill.

La Cave overlooks its own watery vista, Thomas Lake. The timber-framed outside is a cute reference to Strasbourg. The inside is clean and simple with references to the city in the art, and tiny Eiffel Towers here and there.

Most people are probably familiar with Alsatian wines, dry and rich, mineral and steely, tingling with enough acidity to cut through rich food. They are a great foil to what can often be heavy: Fatty sausages, salty pork, stews, casseroles and dumplings. While La Cave has both German Riesling and Gewürztraminer on the menu, along with an Alsatian Pinot Blanc, we opt for the half bottle of Prosecco ($20), which turns out to be a small bottle of lightly floral Villa Sandi Il Fresco with an effervescence that keeps the meal peppy.

The tarte l'oignon alsacienne ($10) is immediately reminiscent of French onion soup: There is a dusky caramel sweetness in the silky, bronzed ribbons of onion that weave their way through the airy-rich custard of the rustic slice of pie. The crust is crisp, flaky. The very middle of the pie still has a slight chill to it that another moment or two of heating would have improved, and there is an inexplicable pot of mayonnaise served alongside a tiny salad of bitter greens and tomato.

We order two of the sauerkraut dishes, one with pork schnitzel ($18) and the other an Oktoberfest plate ($22), a take on one of the most famous Alsatian dishes, choucroute garnie. Both of these dishes feature the restaurant's house-made sauerkraut served warm, cooked with wine, onion and bacon.

The pork schnitzel is pounded thin, breaded and fried to a crackling, burnished gold. A handful of roughly chopped mushrooms sits in a tumble on top, covered with a mushroom sauce that is as creamily light as it is full of flavour. The spätzle—a pile of knobby, eggy dumplings—is delicate, but chewy. I pity the table behind us where everybody ordered frozen French fries on the side. It's the sauerkraut that is the undeniable delight of the night, though: The drunk mellowness that the wine, bacon and heat have given the kraut gives it a round warmth that complements everything on both plates.

The Oktoberfest plate is served with both the sauerkraut and the spätzle, but features a trio of meats: bacon, bratwurst and frikadel, a German meatloaf that is essentially a grilled and flattened pork and beef meatball. The frikadel is covered in the same earthy mushroom sauce as the schnitzel. The salty, juicy bratwurst, sourced from Roselane Farm Bavarian Meat Shop, has a slight sweetness that really pops when dipped into the tangy Dijon mustard.

The whole experience is simple and charming. As we drive out past the twinkling white Eiffel Tower on the front lawn, I already have plans in my head to go back to try the tarte flambee.

Going deep in the shallows with Gilbert van Ryckevorsel

By Allison Saunders and Melissa Buote

Two Planks and 25 years of passion