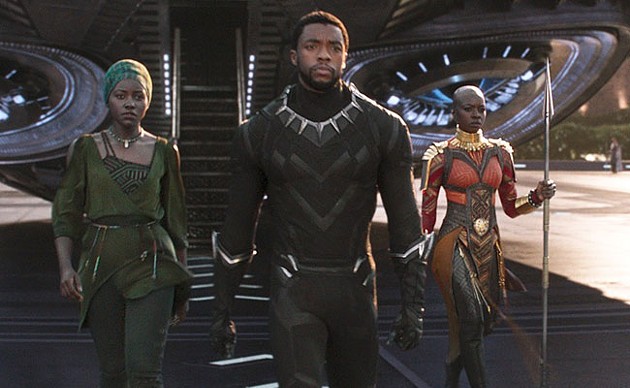 Lupita Nyong'o, Chadwick Boseman and Danai Gurira in Black Panther.
Ryan Coogler is 31 years old. That means he was 24 when he made Fruitvale Station, his first film with Michael B. Jordan (and his first film); 27 when he rebooted the Rocky franchise, of all things, with Creed; probably not yet 30 when he was handed Black Panther, the latest entry in the infinite Marvel universe. That's a quick trajectory by any standard—Demme, Coppola and Scorsese had to come up via Roger Corman; even Rian Johnson's relatively quick trip to Star Wars took three weirdo indies first. But from the colour-jammed opening frames of Black Panther, an intricate and deeply felt superhero-movie anomaly, it's clear that Coogler has the confidence of a filmmaker twice his age, and the skills to pull it off.

T'Challa AKA Black Panther (Chadwick Boseman) has just been crowned king of Wakanda, an East African nation that houses a mountain full of vibranium, a strong and versatile metal that would be perfect to make terrible weapons from. Then an angry orphan named Erik (Jordan) shows up to claim his right to the throne—with the intent to use the vibranium to punish his peoples' historical and current oppression—and things go quite to hell.

Black Panther hits all the stereotypical superhero beats—avenging of familial death, mystical substances, a critical artifact of some kind, big dumb fights—while every other element feels brand-new, such as: Multiple people of colour! Women, talking, a lot! (There are more women with lines here than in the previous Marvel films combined.) A focused, thoughtful soundtrack by Kendrick Lamar! Social commentary! No "cute" appearances by other Marvelverse characters!

As with last summer's Wonder Woman—and as Avengers: Infinity War looms—Black Panther, which had the fifth-highest opening weekend in history, proves that time's up for the same old superhero shit. Show people themselves, and they will show up.