A nascent farm offers struggle and reward in new doc. 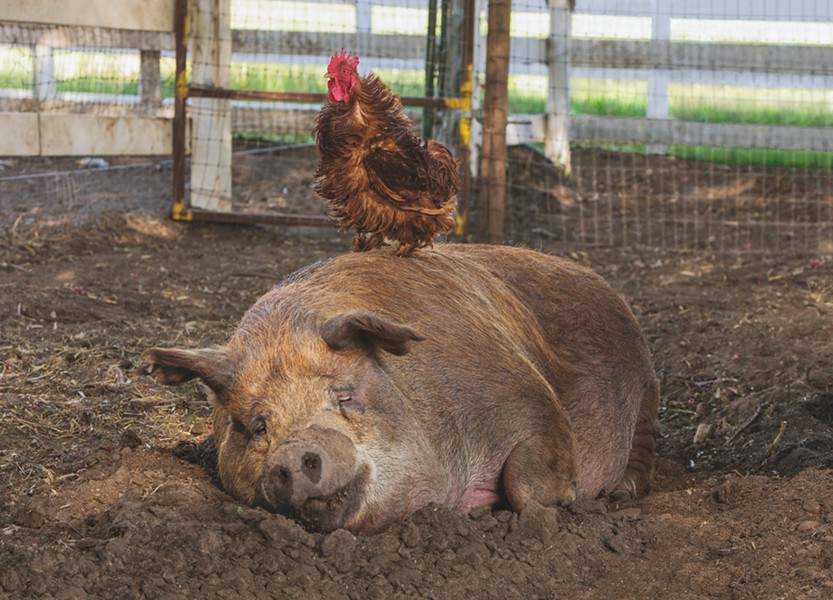 In The Biggest Little Farm, we meet a host of characters: Todd the rescue dog, Emma the pig and Greasy the rooster as well as cows, snails, gophers, coyotes, bees, ducks, a cat, and on and on. These 200 acres in California—dusty, dead, dry soil when Molly Chester and her husband John, who directed and photographed this documentary, purchased them—upon which more than 200 varieties of food are farmed, are host to abundant life and much death. Animal lovers beware: On more than one occasion, John's head drops and he sighs and says "I'm going to have to put her down." Coyotes break into the chicken coops and wreak bloody havoc. Emma struggles mightily after a 17-piglet litter. It's a lot on the heart.

That's certainly what the Chesters are going for here. Molly, a chef and food blogger—there's not enough of her; John narrates—and John, a documentary cinematographer, decide to ditch their cramped Los Angeles life for a more expansive, tough-but-rewarding one. They start with a giant dirt patch, and with much help and time (the film begins in 2010), grow Apricot Lane Farms little by little, obstacle after obstacle, including a tree-snail invasion, gopher infestation and full-on wildfire. Molly is insistent that the farm be organic—no snail poison, for instance—and humane—no coyote traps. The moment John, pushed to the edge of his frustration, runs for a shotgun to take care of the latter is as tense a moment as any Oscar drama could offer. (And the coyote's the bad guy—lots of non-predators are also lost through the film's 90 minutes.)

An earnest idealism—cheerfully admitted in the narration—pushes the narrative through the farm's first decade and it's probably what has kept this operation going, because less dedicated (or more broke) new farmers would've quit by year two. In a time when technology and stuff are measures of success, The Biggest Little Farm offers up a more traditional view of life, existing from what the earth is able to give, in whatever form it may come.