Hugh Jackman goes down swinging in the Jason Reitman comedy. 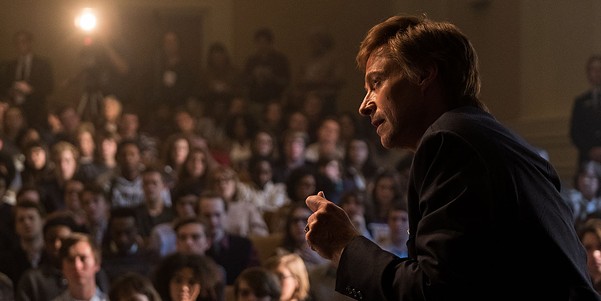 For his second film of 2018, Jason Reitman follows up the remarkable Tully with a completely different beast. Where the former was a quietly scary, exquisitely wrought depiction of post-partum depression, The Front Runner is a political comedy about a real-life event: Gary Hart's 1988 presidential campaign, which was ruined by an affair uncovered by the press (Hart and wife Lee apparently had an understanding).

The notion that a consensual extramarital affair could derail a major politician is almost laughably quaint, considering this point in American history, even though this happened considerably before Clinton and Lewinsky. Reitman, love him or shrug him, has always made classic Hollywood studio films in the system he was born into. They've got big stars, they don't do anything flashy, they're well-focused, well-executed, well-made.

The Front Runner, which debuted at the Toronto International Film Festival (Reitman's hometown audience), has Hugh Jackman at its centre. He's the eye and debris of Hurricane Gary, whose staff and family are sent scurrying when his affair is outed by reporters (who don't come off great or even smart; this is not Spotlight). He's the biggest star by a notable amount but surrounded by a sharp stable of character actors, including the perennially underappreciated Vera Farmiga, Reitman fave JK Simmons, Ari Graynor, Alex Karpovsky, Alfred Molina (second guy to play Ben Bradlee in the past year) and rising star Mamoudou Athie as a young reporter who believes the affair is distracting from actual political issues (lol good luck kid).

This is what's known as an "adult" film and will be catnip to political and scandal junkies alike—to imagine something like this dominating the news cycle without the internet is as old-timey a concept as 2D movies. Jackman, so bombastic in The Greatest Showman and so dead in Logan (spoiler), rarely gets to play more than one emotion; watching him is always a treat but this is especially rewarding. It moves fast, talks fast, reacts fast. It's not thrilling, exactly, but it is engaging and ultimately—surprisingly?—wistful, especially if you went to wikipedia before the movie.