Hathaway and Wilson go for the grift in new comedy. 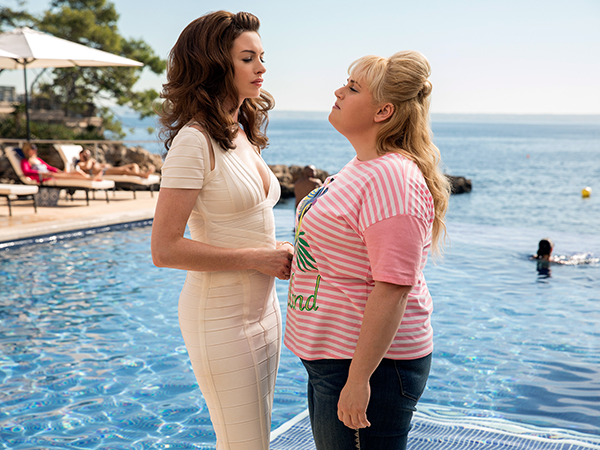 F or a film like The Hustle, dropped in the wake of Avengers before the summer's riptide comes roaring in, you'd be right to approach with tempered expectations. But the film—a grifters' caper starring Anne Hathaway and Rebel Wilson, a remake of Dirty Rotten Scoundrels (Hollywood, please stop it with this)—immediately subverts those with its terrific animated opening sequence, a throwback to the likes of DePatie-Freleng's 1963 Pink Panther titles, or more recently, The Nanny or maybe Archer. It's not some slapped-together counter-programming or tossed-away contract comedy—there's a lot going on, all of it good.

Penny (Wilson) has carved out a pretty good life for herself tricking dumb guys under the guise of being a conventionally attractive internet blonde. But she is no match for Josephine (Hathaway), who has amassed wealth, a home and a staff in France pulling large-scale grifts on rich idiots. They join forces for a bit but turn on each other once a tech billionaire (Alex Sharp) bumbles into view.

This back half is the movie's real joy: It's a delight to watch Wilson, still working her incredibly reliable Pitch Perfect schtick, try to keep up with Hathaway, who speaks in four distinct accents including a flawless German. Their energies—scrappy versus elegant; fearless versus overconfident—play wonderfully, and the script contains enough charming surprises in it that someone screamed one out on opening night.

The Hustle doesn't have a grand message—sure there's a bit about Penny understanding her own worth, but we already saw Isn't It Romantic this year—and it doesn't need one. It's two top-notch comedians trying to steal the movie from one another. They both win.