Streep leads a Hollywood movie of the highest calibre. 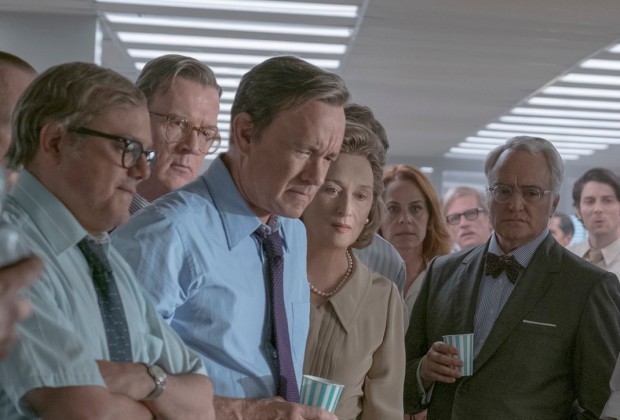 The first draft of The Post was written by Liz Hannah, a 31-year-old television writer with one episode of the drama Guidance to her credit. She was paired with Josh Singer—Spotlight’s Academy Award-winning co-writer—for the produced film, but her fingerprints are obvious. Women—secretaries, less-important reporters, spouses—speak whenever there’s an opportunity, and fill the backgrounds of newsrooms, streets, fancy parties and courthouses. (Geena Davis’ “Two Easy Steps to Make Hollywood Less Sexist,” from 2013, were “Go through the projects you're already working on and change a bunch of the characters' first names to women's names” and “When describing a crowd scene, write in the script, ‘A crowd gathers, which is half female.’”)

This is notable on its own; doubly so because this is a Steven Spielberg production. Sure, he’s got Meryl Streep in the lead, but that’s his first fully realized female topliner since The Color Purple in 1980-fucking-5, wasting the likes of Amy Ryan, Kathryn Morris, Amy Adams, Dakota Fanning, Cate Blanchett and Sally Field along the decades. Even Sarah Paulson, in the shit wife part that mostly involves making sandwiches for the men, gets a pivotal speech in The Post.

Streep is Katharine Graham, publisher of The Washington Post, edited by Ben Bradlee (Tom Hanks). They’ve just majorly lost to The New York Times, which has broken the story of the Pentagon Papers, proving sitting president Nixon (and other presidents) knew the US was losing the Vietnam War, lied about it and kept sending soldiers to die. The Post, too, gets its hands on the documents even as Nixon is rushing to put an injunction in place to stop all media outlets from reporting on the papers. Bradlee of course is willing to risk it; Graham, facing shareholders and a paper about to go public on the stock exchange (and a litigious, vindictive US president), knows it’s the ethical choice, but not a safe one.

Streep is all delicate, refined work while Hanks has chosen energetic bluster; to watch two of our greatest actors play together is just one of The Post’s many gifts. (Send back the typically overdone John Williams score.) The support cast of reporters—Bob Odenkirk, Tracy Letts, Carrie Coon—is just about as stellar, especially Odenkirk as Ben Bagdikian. Though Spielberg’s earnestness can hurt, he knows how to work moments that aren’t inherently cinematic, like talking and reading documents—certainly his longtime DP Janusz Kaminski helps—and inserts lots of press pornography in the form of huge machines and hand-set type. It’s a classic Hollywood movie of the highest calibre, and it exists because of a spec script written by a young woman who wasn’t alive when any of it happened. And of course it resonates, sharply and uncomfortably, with these modern times and their new egomaniac leader trying to control everything he doesn’t like. The Post is an artifact, but it feels like a warning.