Murder victim's family and best friend remember his life and reflect on what he's left behind. 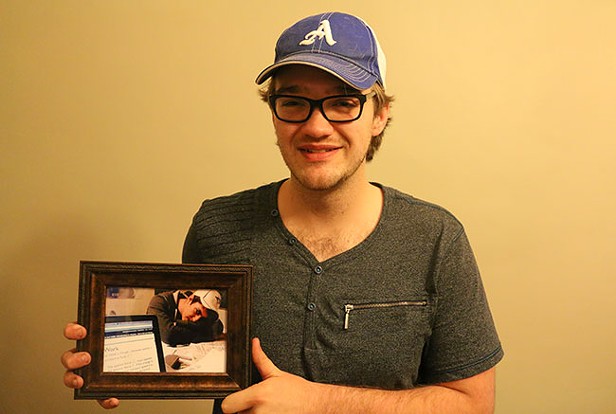 Since the day he went missing, Linda Boutilier hasn’t stopped looking for her boy.

On a rainy Mother’s Day last Sunday, Taylor Samson’s , brother Connor and best friend, Thomas McCrossin, have met to reminisce about the 22-year-old whose death is all the city can seem to talk about.

William , a 24-year-old Dalhousie medical student, is accused of first-degree murder in Samson’s death. The alleged killing ostensibly occurred during a drug deal where Samson was supposed to sell 20 pounds of marijuana.

The media frenzy surrounding the ongoing trial has been frustrating for Boutilier, who has seen her son reduced to a “Dalhousie drug dealer.”

Samson was a goofy self-taught guitar player who posted videos of himself playing for his friends, she says.

What’s left behind now is the YouTube channel he created, dedicated to helping young students struggling in first-year calculus classes, and an autistic brother who misses his older sibling.

“Taylor was just so proud that Connor was able to finish high school,” says Boutilier, remembering Taylor with tears streaming down his face when Connor, now 22, graduated.

“I made him cry,” says a shy Connor Samson, sitting next to his .

Boutilier isn’t ashamed of Samson’s drug dealing, saying he did it to pay for where he was studying physics.

“Taylor sold marijuana to help get through school, that’s what he did,” she says. “People don’t like it? Well, too bad.”

McCrossin says Samson wanted to move out of drug dealing and had the mind of an entrepreneur. The last time the two friends saw each other, around the summer of 2015, Samson was telling him about his new tutoring business.

“He said he how hard it was in year, so he started putting tutorials on YouTube for first-year students who never had money and could actually follow him if they were stuck on something,” says McCrossin.

The tutoring business operated off of YouTube as well, but Samson was worried a lot of students couldn’t afford it. There were incentives, says McCrossin, where if you did well enough in school you wouldn’t have had to pay as much for the classes.

“The more and more that he talked about it, it was just this thing that really wouldn’t have made him much money at all.”

Her son just loved helping people and making them feel included, says Boutilier. She remembers fondly how crazy he used to drive her.

In the first four weeks of the continuing trial, the Halifax jury heard testimony about the investigation, saw hours of police interview footage with and heard eyewitnesses describe a bloody scene and body in apartment moments after they heard a gunshot from across the hall.

The last time Samson was seen alive is captured on a video surveillance system had set up outside his apartment. The 6’5”, 210-pound Samson is seen walking down a hallway behind and then following him into the apartment.

Since the day Samson went missing, Boutilier has had to deal with constant rumours and acquaintances offering up their own unsolicited pet theories about what happened to
her son.

“I’ve literally had people come up to me and tell me, ‘You know he’s chopped up somewhere,’” she says.

After everything—the trial and the public attention—her concern is still finding her boy. She still physically searches for his remains, conducting her own investigation.

She’s also attended every hearing since the trial began.

“I go in there because I got most of it put together, but the part I’m trying to find out is where Taylor could be,” she says.

In the cold and sterile environment of the courtroom, Boutilier and McCrossin sit almost every day, hoping to hear something that might help them find Samson.

“I’m not going to stop until I find Taylor,” says his .