With a new crop of fast food joints, and burgers on every menu in town, one restaurant and two chefs double down on comfort and novelty for the win. 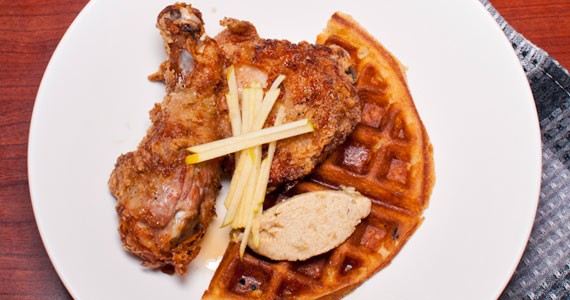 Living in a reservations-only land of futuristic foods and fantastic ingredients, they spent small fortunes on tasting menus and, compared to the unskilled people who made fast food and the uncouth people who ate it, they felt pretty special.

Those meals still happen for rarified one-percenters, but most appetites for exceptional excess dried up awhile ago. Like those of us subsisting on the outer rim, the well-fed took to their sofas, read food blogs and daydreamed about fancy takeout.

Fast food's reinvention is part of a wider trend of omnivorousness, where good taste has little to do with traditional cultural boundaries. Since 2008, gastronomy's frosted white tower has been breaded, fried and drowned in a pool of hand-crafted mayonnaise. Fine diners demanded affordable comfort, so chefs dove into the clogged heartland of our continental diet: fast food.

"People want the familiar right now, so the challenge that everyone's trying to come up with, the new burger places and everything, is to outdo each other on the familiar," says Giffin.

Giffin couldn't take his McCoastal breakfast sandwich off the menu even if he wanted to. People clamour to his fast-food-alikes like zombies to Mensa members. Our relationship to fast food is emotional, moving between depression, inspiration, gratification and disgust in a few bites. Chefs are no exception.

"Every chef will tell you that they have a guilty pleasure in fast food," says Giffin. "If I am around food and working in food all day, I have no appetite. The thought of eating makes me sick."

And when you feel existential nausea, where do you go? The golden arches, of course. "Then I have instant McRegret. Still, you know what you are going to get, there is no variance. It's there, it's quick, it's disposable and you are done."

Ruppel hasn't walked into a McDonald's in two years. In a way it's great, he says, but it's been too over-designed to push all your buttons. It reeks of manipulation.

"It fires all your sensors, everything gets going, but at the same time, it does have that processed taste. It tastes too much like you are obviously messing with my head and trying to make me addicted to this."

Fast food triumphs not by taste but because it's a cultural staple that combines affordability, ubiquity and identity. If you were born in the last 50 years, you grew up eating processed food. The first Happy Meal you ate wasn't great, but its memory lingers forever as an exciting event.

"It was amazing because you were six," Ruppel says. "So now that you are 36, you want to try and get that feeling that this is amazing again. You are chasing after that."

"Those are also shared cultural moments that we can connect to on a different level. It's not just about the food," Ruppel says. "I can see how these little taste memories can trigger things going back to this nostalgia for food that never existed."

Pace is another thing that's changed over four years. With the social media boom, we have a faster culture. We seek novelty every day. Chefs feel pressure to keep people entertained. It's the opposite of slow food.

Fast food giants understand novelty: Whiplash Whoppers, Son of Baconators and other ephemera regularly boost profits. The Double Down was KFC's most successful menu item ever in Canada, selling over 350,000 in two weeks. Every new, increasingly improbable sandwich---and its quasi-pornographic ad campaign---swings new customers into the drive-thru.

"Novelty is very strong, almost as strong as nostalgia in your brain," says Ruppel. "Novelty will create new memories. That sensation of being new and novel is another important aspect." Novelty and nostalgia drive Ruppel's cooking. Every week he creates a new menu stuffed with pop culture references. There was TV Dads---dishes inspired by Tony Soprano, George Bluth, Frank Costanza and Homer Simpson---as well as menus featuring British pub foods, '60s picnics and the Jazz Age.

He devoted a menu to his sous chef's favourite foods, making crispy, tender confit chicken wings and mozza sticks by freezing, breading then frying a dense cheese sauce, so when you bit in, the inside was liquid. Then there's his signature fried chicken and waffles meal that ends with a five-frosting birthday cake.

Ruppel's pace is almost impossibly prolific, but at 28, he wants to make his mark on the city, even if the novelty kills him.

"If I am not moving forward, then I am falling back," he says.

Likewise, from Giffin's perspective, if a novelty item doesn't sell---like his magical childhood cereal bowl---it gets nixed, but there will always be more. "There were a lot of things that I thought, 'Oh, I love this,' but that didn't sell. But goddamn those chicken wraps just fly off those shelves!"

His breakfasts fine-tune high (Oeufs d'été) and low (Durty Burd), pop culture goofing (The Sylvester, The Elvis) and staples (huevos rancheros). That's been Coastal's successful approach and it's why Giffin left high-end cooking to open his own restaurant. "There's no pretensions there. It is what it is," he says. "I don't care about being rich as long as I'm paying my bills, working by myself, loving everything I'm doing."

Not all new fast food will be as brilliant as the two Coastals, but for a self-reliant city isolated from bigger cultural centres, this food trend suits Halifax. Quality is cheaper and more available than ever.

"It's a great equalizer," Ruppel says of the burger glut. "Perfect for these depression-recession times." He even has his own burger price index: $2 burgers, not good. Five dollars, reasonable. Eight bucks gets you a pretty good one, while $15 is the best burger you're going to get. Charge more, he says, and you're a douche. "You're paying for some ridiculous wankery. There's nothing you're actually adding to make that burger experience better."

Andy Murdoch is a part-time food writer who doesn't mind if you wrap your fish and chips up in this newspaper when you're finished reading.