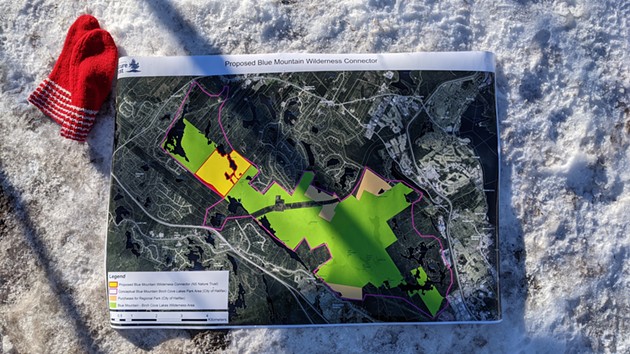 The Coast headed out with Joanna Skomoroski, the NSNT's stewardship coordinator and Tanya Colburne, director of philanthropy and engagement, to give folks in Halifax a look at the land. Because the new land is, well, new—to the NSNT at least—it isn't yet accessible to amateur hikers, so we explored part of the wilderness area that already is.

After parking the cars at the Maskwa Aquatic Club—which is also semi-accessible by bus if you don't mind walking and or figuring out a few connections—we headed out, with Skomoroski sharing fun facts and helpful info about the plants and wildlife in the area. (Did you know chickadees can shiver away half their body weight in one night to keep warm in really cold winter temperatures?)

Follow along on the winter hike on our Instagram stories highlight (click here if you're reading this on a desktop and here if you're on mobile) or watch below.

With the purchase of the connector property in December, the whole park now spans 5,000 acres—with only a few more swaths of land remaining to be purchased for the full vision of the wilderness conservation area to come to life. (Point Pleasant Park, in contrast, is only 190 acres. You could fit Point Pleasant Park into the Blue Mountain Birch Cove Wilderness Area 26 times.)

The pink outline on the map below is the goal for the NSNT. The green parts are owned by the province of NS, the orange bits purchased by HRM, the yellow part is the 545 acres recently purchased by the NSNT.

There was drama last summer over HRM's contribution of $750,000 towards the latest purchase. Staff had recommended against the contribution because the directives they'd previously received from council said the land was outside of its plan for the area. A debate over conflicting versions of maps found its way to the consensus that HRM wants to protect parkland when it can, and this was a golden opportunity to do so. So council overrode the previous council's decision about the boundary to make sure the NSNT got the money it needed to buy the land. (There was also a pressing deadline for the funding at the time, which added fire to the flame and eventually worked out in the NSNT's favour.)

Then, in November, HRM was informed that the land acquisition was actually just 220 hectares, not 232 hectares as originally asked, because the private owner wanted to keep a portion of the land (the red bit along the bottom left of the yellow connector part of the map) for future development. Council was told that if the land ended up being developed (which it likely will), it'd include access to the wilderness land. Council voted OK and its $750,000 joined forces with $500,000 from the national Canada Nature Fund, $200,000 from the province plus $500,000 from the NS Crown Share Land Legacy Fund, $161,000 in public fundraising and a land donation valued at $414,000. All told, the NSNT raised $2.7 million.

The four PIDs (the technical term for a single chunk of land owned by a single entity) of land that made up the purchase were owned by either Bill Fenton, an investment advisor with BMO wealth management, or Robin Wilber, president of the Elmsdale Lumber Company who was cut from the province's Boat Harbour transition team in January, shortly after being appointed, for saying he thought the pulp mill should be run at a hot idle—essentially keeping running while they get more time to figure out what to do.
“Robin Wilber is focused on options for Northern Pulp,” said Kelliann Dean, deputy minister of Intergovernmental Affairs and Trade and forestry transition team lead, in a release last winter. “That is not part of the transition team's mandate therefore he is no longer part of the transition team."

The now 5,000 acres of protected land join the Nature Trust's thrust toward its #doublethewild goal to protect 30,000 acres of land by 2023. It's a tough task in Nova Scotia, where—unlike other provinces in Canada that have large portions of crown land—most of the land in the province (over 65 percent) is privately owned. Whereas 60 percent of the area of the province of Alberta, 94 percent of the land in British Columbia, 95 percent of Newfoundland and Labrador and 48 percent of New Brunswick are owned by government, not privately owned.


By setting out—since 1994—to protect ecologically significant natural areas via private land conservation, the Trust will see that land, either donated or bought, will be kept wild in perpetuity.