Renovation 1
A home off Quinpool Road is transformed by a savvy pair of first-time home buyers.

Troy Woodland and his wife Mary Robinson are responsible for the big changes in their first home. Following a purchase price of $220,000 with an investment of $30,000 , they’ve more to do still, including the outside of the place.

“Our house looks a little like a crack house right now because we haven’t done the exterior yet,” says Robinson, laughing. “We were saying this week that we have to paint the outside this spring.”

The couple essentially renovated the entire house themselves. Woodland has some experience with renovating and did everything from the electrical, including lights and wiring, and the plumbing, which involved moving the bathroom from one end of the house to another and installing new water lines.

Other changes involved a lot of drywall, flooring, windows, doors, trim, deck, shelving and redesigning the kitchen. With the house being older, there were a few surprises: Working down in the basement, they discovered there was a dirt floor beneath the wood.

“We had the pull the basement apart because we discovered mould and moisture down there,” says Robinson. “Then we found the house itself was sinking, so we spent a month trying hoist the main level up.”

The house was purchased in April 2009, with majority of the work completed between May and August of that year, working every evening and weekend to do it.

“We gutted it down to nothing,” says Robinson. “It was pretty hectic for awhile.” 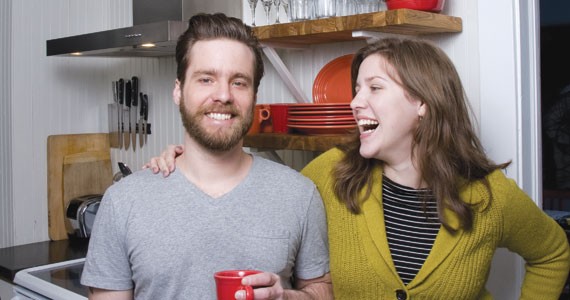 Renovation 2
A first-time home buyer without a lot of experience guts a kitchen.

In 2007, Ricardo Salcedo bought a house for him and his family facing the narrows, where all the houses were built in the years following the 1917 Halifax Explosion. In 2008, he knocked out the whole kitchen, which his wife, Brie Rehbein, redesigned.

“It was pretty old-school,” he says of what it once looked like. “You open up one of the cabinet doors and the sewage pipe went through it.”

Salcedo works in communications, so the world of renovations was pretty new to this first-time homeowner, and involved building new cabinets, concrete countertops and a butcher block countertop, installing new sinks and appliances. Everything except the plumbing and the electrical work, he and Rehbein did themselves. The only thing left to be done is the floor, which is still linoleum. “The work took about five months,” he says. “Not because it needed that long, but we took our time. We cook a lot so we had to keep it so we could still use it. We timed it in such a way that we were only without a sink for 24 hours. It wasn’t ideal but it was a usable kitchen.”

The entire project cost in the range of $5,000, with money saved by having done the labour---with the help of friends---to install the countertops and cabinets, among other things. The entire kitchen was the product of Ikea. “Everything comes from Montreal,” says Salcedo. “Ikea has this software where you plug in the dimensions of your room and design your space with all of their cabinets. And everything fit within a quarter of an inch or less.”