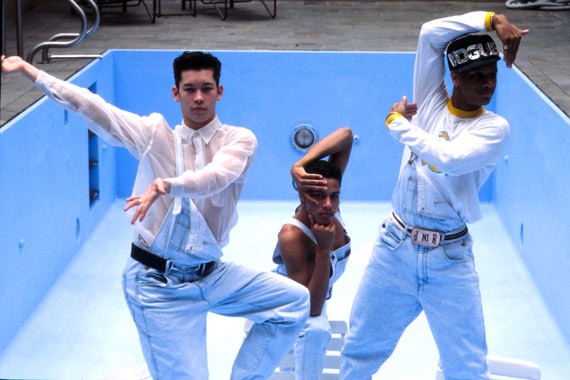 Where did Madonna’s Blonde Ambition dancers end up? Strike a Pose reveals all.

In 2010, OUTeast co-founders Andria Wilson, Jenna Dufton and Krista Davis were working at the Atlantic Film Festival "and we saw all these line-ups of people whenever there was a film with queer content," recalls Wilson. "We just kept seeing it, day after day, and we wanted this opportunity to reach that audience, to be not just one line in a cinema, but to be the whole cinema."

"We're at a point now where we're corresponding regularly with other queer film festivals," Wilson says. "Not just in Canada, but around the world we have these relationships with distributors. That's not an accident. That's us working really hard for five years. Of course, none of us have aged a day."

OUTeast's goal, Wilson says, is to "keep people excited and interested and bring content that is going to be something people are going to want to leave their houses and go see."

To that end, this year's opening night film is Major!, a documentary about 73-year-old Miss Major Griffin-Gracy, a transgender woman of colour who's been an activist in New York for over 40 years.

"Major! was a no-brainer for us because it was an opportunity to really showcase a hero in our community whose story everyone might not know," says Dufton. "This documentary really digs into her amazing life and all of the truly important work she's done for the trans community."

Wilson calls Griffin-Gracy, whose past includes participating in the Stonewall riots and landing in New York's infamous Attica prison a week after its own 1971 riot, "one of the all-time most impactful artists in recent American history."

Another documentary at OUTeast, Strike a Pose, follows the troupe of backup dancers featured in Truth or Dare, director Alex Keshishian's chronicle of Madonna's 1990 Blonde Ambition Tour, and how they've dealt with the resulting fame. "I saw it"—at the Berlin International Film Festival—"and knew I had to have it," says Dufton. "I wrote a love letter to the distributor saying I needed it in my life. Thankfully, they agreed."

Dufton considers Truth or Dare an important film because "it was the first time I remember seeing a woman who was so empowered, sex-positive, feminist, queer."

Wilson had a similar experience: "I grew up in the theatre and I never saw that fluidity of gender roles and the way those dancers embodied what we'd now consider this sort of genderqueer sexiness."

Strike a Pose catches up with Madonna's dancers a quarter-century later and "is just the right mix of nostalgia for Truth or Dare and bringing us into this whole new beautifully done narrative of what their lives are like now," says Wilson.

An award-winner at Berlin, Paris 05:59: Theo & Hugo is a romance that follows two gay men exploring the titular city, and features an explicit 18-minute opener in a sex club.

"We made sure to mention it in the program note so that people knew what they were getting into," says Dufton. "It's extremely important and is used to propel the narrative forward. The rest of the film isn't possible without that scene."

"I'm not interested in having a queer film festival that's neutered in any way," says Wilson. "We're not showing episodes of Will & Grace—this is not about perpetuating the archetype of a gay man who keeps a clean house and gives his straight girlfriend advice. These are gay men who have sex with each other. And if that happens in a film and if that's part of an amazing, beautiful love story that we feel should be seen by our audiences, it's important to not shy away from content that may be seen as controversial."

Director Chris Kelly's Other People features Jesse Plemons and Saturday Night Live's Molly Shannon in a story about a gay man's relationship with his dying mother. Wilson calls it an "awards-track movie" for Shannon, which Dufton asserts was not a factor in its selection: "I would never program a film just because it had a name actor in it," she says. "But it is a nice bonus when it works out. If Molly Shannon brings more people in the door and when they get here they see a great film with queer content, that works for us."

"What I love about Real Talk is that it introduces the audience to a real cast of characters," says Dufton. "Being able to pack that many inspiring stories into one program is very special." And though she refuses to pick favourites from the Drama! roster, Dufton says she "can't wait for people to see Killer Friends. Watching that with an audience for the first time"—at the Inside Out LGBT Film Festival in Toronto—"was pretty amazing."

As for the future, Wilson points out that even a niche festival like OUTeast feels the effects of the recent industry-gutting changes to Nova Scotia's film tax credit, specifically in regards to getting funding for OUTeast's youth filmmaker mentorship programs.

"I think from our perspective, our queer voices are already marginalized, so if less content is being made then less queer content is getting made," says Wilson. "As film presenters, we have a really important part to play in this whole conversation, because we're in the business of creating opportunities and creating audiences, and if there's nothing being made, we have nothing to show."

"We would obviously love to grow our audience and be able to put more eyes on the films we're showcasing," Dufton says. "We're three friends who wanted to see what would happen if we tried something, and five years later we still get to bring films that we care about to the community that they're made for. As long as we're able to accomplish that, I'm happy."