Watch some fascinating transformations as a five-actor cast performs Macbeth 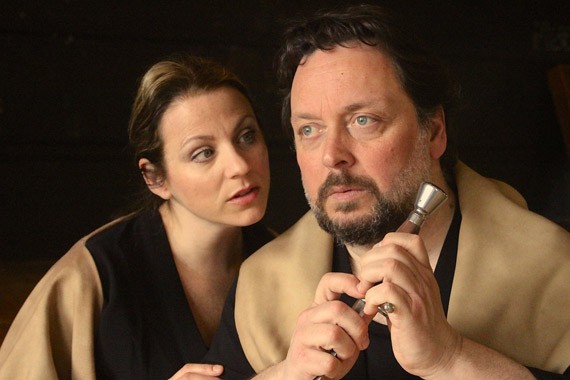 Macbeth is coming to Neptune, but not in the way you might expect—director Ken Schwartz has reimagined it as a five-actor enterprise, with Jeremy Webb as the titular would-be king, and actors Francine Deschepper, Sarah English, Margaret Legere and Jeff Schwager juggling multiple characters apiece.

Deschepper, playing Lady Macbeth and others, says the balancing act is "really fascinating. You get to see an actor change physically, their voice, the way they walk, the way they hold themselves." Aiding in this transformation are costumer Sarah Hayden Roy's origdesigns, "these pretty incredible, simplistic-but-flexible overgarments that allow us to switch into many different looks," and a sixth unofficial cast member, Ben Marmen, an "amazing cellist" who will remain onstage throughout the performance.

And though she gives ample praise to Schwartz ("smart, generous,") Webb ("born to play Macbeth,") and the rest of the cast ("they add a whole other level to the play,") Deschepper reserves considerable acclaim for Lady Macbeth herself. "She has this famous monologue where she asks the spirits to unsex her so she can be more manly and have the gumption to murder the king. There's a lot of gender talk in the play, and it's a politically ambitious role for a woman, and that's amazing for Shakespeare to be examining in the 1600s."

It's "such an iconic role, people have a lot of set ideas about her," says Deschepper. "But I approach her as someone who's more of a type A."