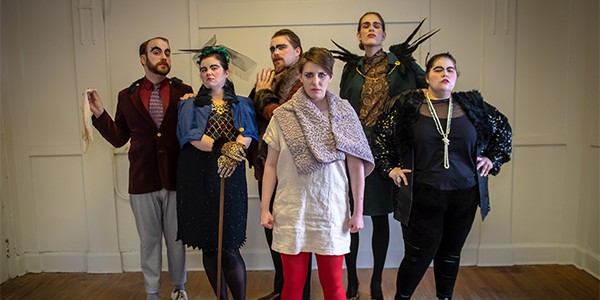 Colleen MacIsaac, artistic producer of The Villain's Theatre, is no stranger to bringing old works to contemporary stages. But even she says that Volpone, an early-17th century comedy by British playwright Ben Jonson, presented a particular challenge for adaptation in the present day.

"It ends with this woman who's put on trial for being assaulted, more or less," she says. "That's not addressed, and in the end the guy who does it gets to get away with a wink and a smile."

Fox, the Villain's Theatre's latest production, is the result of MacIsaac co-adapting Volpone with director Kathryn McCormack and The Villain's Theatre artistic director Dan Bray. In their adaptation, Villain's essentially does away with Volpone—that conniving, wink-and-smile lead from the original—and centers Celia, the woman who was left frustratingly silent in Jonson's play.

"We felt both that the play was dated as it was, but also that the things that were happening in it were things that were happening currently," says MacIsaac, who also plays Celia. The work to adapt the play has spanned the past several years, a time that has included many high-profile cases of survivors of sexual assault navigating the justice system. It became clear, MacIsaac says, that a contemporary adaptation of this play needed to give Celia the space and perspective to share her story.

"Do we use entirely existing text that's there and rework it, or do we bring in our own new things to the piece to bridge that?" she asks, describing their process of adaptation. "With this one, we knew yes, it does need new material, because we need Celia to have a voice."

Bray says he's had his eye on Volpone for years—he describes it as "one of those plays that you always remember," at times both farcical and challenging. After Bray workshopped an earlier version of Fox at Dapopo Theatre's Live-In Festival, MacIsaac and then McCormack joined the project. With their insight, he says, the adaptation found its direction: They trimmed the play down to a tight hour-long runtime, a significantly smaller cast and a single setting. Fox focuses on Celia's trial scene at the end of Jonson's Volpone—it plays in a mock courtroom at Dalhousie's Weldon Law Building, running February 20-24.

"Truly, the big problem [with Volpone] is that Celia has no voice," says McCormack. "That is something that's happening today—women are still silenced. Even in the rehearsal hall, I keep joking—some of the text I want to project behind it, 'This text is 400 years old,' because it could be said any day, anywhere, today."

McCormack says it's that uncanny resonance between a 400-year-old play and the current moment that drew her to the story. The Villain's adaptation blurs those lines between the past and present, pairing sharp contemporary monologues with echoes of the original text that have stayed the same for hundreds of years.

Beyond the play's comedic and nonsensical elements, McCormack says she's most compelled by the drawing of throughlines from seemingly distant times to the present day. Watching the play's action like a jury in a courtroom, she says, the audience can't help but wonder how much our current judicial system—and other systems of power—differ from those on stage. It's a meditation on how some things can change while others, "frustratingly," stay the same.

"It's not on screen, there's no disconnect, you are there no matter what kind of theatre you're in," says McCormack. "Honestly, that's the best thing about live theatre. No matter what you see, somehow, as the audience, you are complicit in what you've just watched."