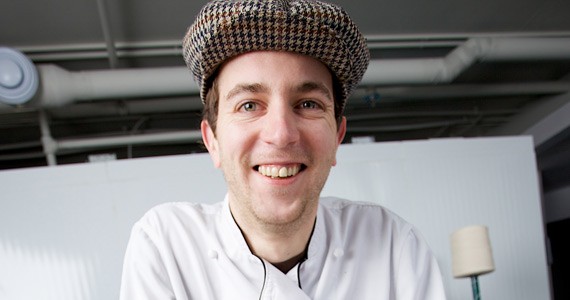 Frédéric Tandy has let the seasons be his guide since the beginning of his career in the kitchen. A native of Limoges, France, he grew up eating well and taking inspiration from his grandparents’ home cooking, garden-growing and pâté-making. So, his decision to go to culinary school was a natural one. “I didn’t want to go to regular university,” he says of his four years of training. “I liked it, but as the years were going by the more I loved it, and it’s become my passion now.”

Tandy worked in hotels and restaurants across France seasonally, dividing the year into summer and winter. In 2002 he answered two ads for cooking work–one in Canada, the other in Bora Bora–and got both jobs. On a whim, he chose Cape Breton’s Keltic Lodge as his destination for the summer, and the two after that. “That’s where I fell in love with Canada, to be honest with you,” he says.

He ventured further to Halifax’s Bish, then Whistler, then Lunenburg’s Fleur de Sel. When he eventually returned to Halifax, and Bish, he started craving something of his own. “My first thought was to open a traditional French bistro, but the bank didn’t agree with that,” says Tandy. So he hit the farmers’ markets with his French charcuterie, and after three years of making it work out of a rented kitchen the bank was on his side.

In 2011, Charcuterie Ratinaud French Cuisine –named for Tandy’s grandparents–came to life, wowing with cured meats, cheeses and pâtés and prepared dishes. This year Ratinaud introduced The Kitchen Table, a now twice a month pop-up restaurant that gives diners a backstage pass to the authentic French meal’s prep and gives Tandy his bistro. And his main inspiration? The season. “I just see what I can find at the market and a lot of times I just come up with dinner the morning before,” he says. “If I had opened a restaurant that’s what I would have done, no menu right on the table. I would have created it every day or every couple of days.

“To be honest I just do what I love to do. I don’t run a business to make a ton of money, I run a business because I can do whatever I want to do, more or less, and I just enjoy myself and try to share that with my customers,” says Tandy. “It’s as simple as that.”