Canada’s negotiating another local, sustainable-economy- killing free-trade agreement, but the city of Halifax ignores it. 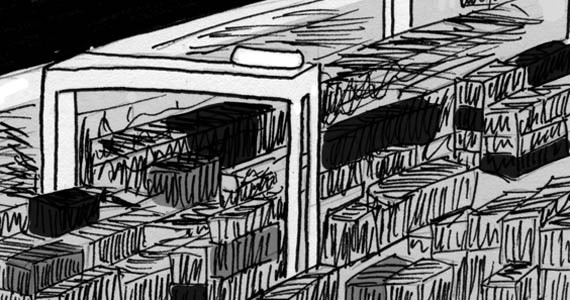 The ding-dongs ruling this shitshow are pushing for another free trade agreement---the Comprehensive Economic and Trade Agreement between the European Union and Canada.

Think the World Trade Organization, its General Agreement on Tariffs and Trade and the dozen or so free trade operational agreements covering the globe are related to that global economic hiccup that has taxpayers footing multi-billion-dollar bailouts and Wall Street occupied by protesters?

Au contraire, say the ding-dongs. We need more of this self-destructing-as-we-speak model. They are the elite's elite. In Europe CETA is being driven by a few dozen companies, like Suez, a water corporation and the second-largest utilities company worldwide, with $137 billion in annual revenue.

The big corporate dogs sit together at the Canada Europe Round Table for Business, which wants a complete "opening of capital and procurement markets."

"If a European company gets a contract it won't have to include green jobs, local employment or local or ethical purchasing, which are required of municipalities," says Janet Eaton of the Trade Justice Network. "The green jobs promised in the Ontario Green Energy Act are already being questioned. European firms want us to get rid of our supply-managed agriculture---the only farms making money. They want provisions not allowing farmers to save seed. They want the right to sue our governments, using private tribunals, for protecting the environment or local economies."

Canada has already surrendered the rights of provinces and municipalities to prioritize local businesses in dealing with American competition, ironically in support of Obama's protectionist legislation. It's no surprise that transnational corporations want to slay the buy-local movement in its infancy. But the audacity of our political "leadership" in slipping through disgraced free-trade policy as the economy collapses, while making the bald-faced lie that 80,000 jobs that will be created, is skull-popping.

Economist Jim Stanford H-bombed the free-trade lies in his 2010 report, Out of Equilibrium. He found the European Commission and Canadian government's assertion that CETA gains would be worth $12 billion a year to be based on obtusely fantastical assumptions of 100 percent employment and markets that perfectly self-adjust. Even the drivers of CETA acknowledge that Canadian imports will increase twice as much as exports. CETA reduces economic autonomy when we need it most.

You'd think local governments would be concerned by these increasing infringements on their rights to govern. But with the exception of British Columbia municipalities, that's not the case. In September 2010, the Union of BC Municipalities called on the province to negotiate a permanent exception for them from CETA.

Then in June, here in Halifax at the annual meeting of the Federation of Canadian Municipalities, a motion to discuss CETA was narrowly defeated.

Three months later, the city "has no official position on CETA at this time," spokesperson Katherine VanBuskirk says. They're leaving it up FCM, which is supporting CETA, and has developed seven principles of a good deal.

Most notably, FCM says the deal should "recognize strategic and public interest considerations before barring all preferential treatment based on country of origin. There may be industries of strategic significance to a particular region, such as transit, or projects where considerations of quality, public benefit, environmental protection or business ethics means that a local government may wish to implement minimum Canadian-content levels."

FCM also wants "a careful review of the municipal role" in dispute resolution when some corporation inevitably sues a government for not privatizing its water supply and transit system, or for subsidizing an affordable housing complex.

Eaton has been keeping Peter Kelly up to speed on CETA and is not surprised by the city's non-response: Kelly's "wary to go out on a limb because so much federal money is on the line here. But he should be looking out for the best interests of the city."