No generic or routine days, Sagittarius 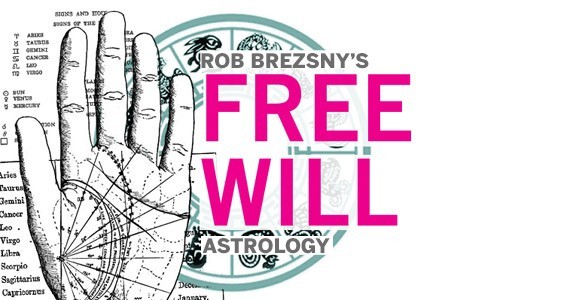 
“When you plant seeds in the garden, you don’t dig them up every day to see if they have sprouted yet,” says Buddhist nun Thubten Chodron. “You simply water them and clear away the weeds; you know that the seeds will grow in time.” That’s sound advice for you, Aries. You’re almost ready to plant the metaphorical seeds you’ll be cultivating in the coming months. Having faith should be a key element in your plans for them. You’ve got to find a way to shut down any tendencies you might have to be an impatient control freak. Your job is simply to give your seeds a good start and provide them with the persistent follow-up care they will need.


"Thank you, disillusionment," says Alanis Morissette in her song "Thank U." "Thank you, frailty," she continues. "Thank you, nothingness. Thank you, silence." I'd love to hear you express that kind of gratitude in the coming days, Taurus. Please understand that I don't think you will be experiencing a lot of disillusionment, frailty, nothingness and silence. Not at all. What I do suspect is that you will be able to see, more clearly than ever before, how you have been helped and blessed by those states in the past. You will understand how creatively they motivated you to build strength, resourcefulness, willpower and inner beauty.

I bet your support system will soon be abuzz with fizzy mojo and good mischief. Your web of contacts is about to get deeper and feistier and prettier. Pounce, Gemini, pounce! Summon extra clarity and zest as you communicate your vision of what you want. Drum up alluring tricks to attract new allies and inspire your existing allies to assist you better. If all goes as I expect it to, business and pleasure will synergize better than they have in a long time. You will boost your ambitions by socializing, and you will sweeten your social life by plying your ambitions.


During her 98 years on the planet, Barbara Cartland wrote 723 romance novels that together sold a billion copies. What was the secret of her success? Born under the sign of Cancer the Crab, she knew how productive she could be if she was comfortable. Many work sessions took place while she reclined on her favourite couch covered with a fur rug, her feet warmed with a hot water bottle. As her two dogs kept her company, she dictated her stories to her secretary. I hope her formula for success inspires you to expand and refine your own personal formula---and then apply it with zeal during the next eight weeks. What is the exact nature of the comforts that will best nourish your creativity?


The Google Ngram Viewer is a tool that scans millions of books to map how frequently a particular word is used over the course of time. For instance, it reveals that "impossible" appears only half as often in books published in the 21st century as it did in books from the year 1900. What does this mean? That fantastic and hard-to-achieve prospects are less impossible than they used to be? I don't know, but I can say this with confidence: If you begin fantastic and hard-to-achieve prospects sometime soon, they will be far less impossible than they used to be.


The Tibetan mastiff is a large canine species with long golden hair. If you had never seen a lion and were told that this dog was a lion, you might be fooled. And that's exactly what a zoo in Luohe, China did. It tried to pass off a hearty specimen of a Tibetan mastiff as an African lion. Alas, a few clever zoo-goers saw through the charade when the beast started barking. Now I'll ask you, Virgo: Is there anything comparable going on in your environment? Are you being asked to believe that a big dog is actually a lion, or the metaphorical equivalent?


In T. S. Eliot's poem "The Love Song of J. Alfred Prufrock," the narrator seems tormented about the power of his longing. "Do I dare to eat a peach?" he asks. I wonder what he's thinking. Is the peach too sweet, too juicy, too pleasurable for him to handle? Is he in danger of losing his self-control and dignity if he succumbs to the temptation? What's behind his hesitation? In any case, Libra, don't be like Prufrock in the coming weeks. Get your finicky doubts out of the way as you indulge your lust for life with extra vigour and vivacity. Hear what I'm saying? Refrain from agonizing about whether or not you should eat the peach. Just go ahead and eat it.


Born under the sign of Scorpio, Neil Young has been making music professionally for over 45 years. He has recorded 35 albums and is in the Rock and Roll Hall of Fame. In early 1969, three of his most famous songs popped out of his fertile imagination on the same day. He was sick with the flu and running a 103-degree fever when he wrote "Cowgirl in the Sand," "Cinnamon Girl" and "Down by the River." I suspect you may soon experience a milder version of this mythic event, Scorpio. At a time when you're not feeling your best, you could create a thing of beauty that will last a long time, or initiate a breakthrough that will send ripples far into the future.


There should be nothing generic or normal or routine about this week, Sagittarius. If you drink beer, for example, you shouldn't stick to your usual brew. You should track down and drink the hell out of exotic beers with brand names like Tactical Nuclear Penguin and Ninja Vs. Unicorn and Doctor Morton's Clown Poison. And if you're a lipstick user, you shouldn't be content to use your old standard, but should instead opt for kinky types like Sapphire Glitter Bomb, Alien Moon Goddess, and Cackling Black Witch. As for love, it wouldn't make sense to seek out romantic adventures you've had a thousand times before. You need and deserve something like wild sacred eternal ecstasy or screaming sweaty flagrant bliss or blasphemously reverent waggling rapture.


Actor Gary Oldman was born and raised in London. In the course of his long career he has portrayed a wide range of characters who speak English with American, German and Russian accents. He has also lived in Los Angeles for years. When he signed on to play a British intelligent agent in the 2011 film Tinker Tailor Soldier Spy, he realized that over the years he had lost some of his native British accent. He had to take voice lessons to restore his original pronunciations. I suspect you have a metaphorically comparable project ahead of you, Capricorn. It may be time to get back to where you once belonged.


Every now and then, you're blessed with a small miracle that inspires you to see everyday things with new vision. Common objects and prosaic experiences get stripped of their habitual expectations, allowing them to become almost as enchanting to you as they were before numb familiarity set in. The beloved people you take for granted suddenly remind you of why you came to love them in the first place. Boring acquaintances may reveal sides of themselves that are quite entertaining. So are you ready and eager for just such an outbreak of curiosity and a surge of fun surprises? If you are, they will come. If you're not, they won't.


Before she died, Piscean actress Elizabeth Taylor enjoyed more than 79 years of life on this gorgeous, maddening planet. But one aptitude she never acquired in all that time was the ability to cook a hard-boiled egg. Is there a pocket of ignorance in your own repertoire that rivals this lapse, Pisces? Are there any fundamental life skills that you probably should have learned by now? If so, now would be a good time to get to work on mastering them.