Friday update: looking for hope on the holiday weekend 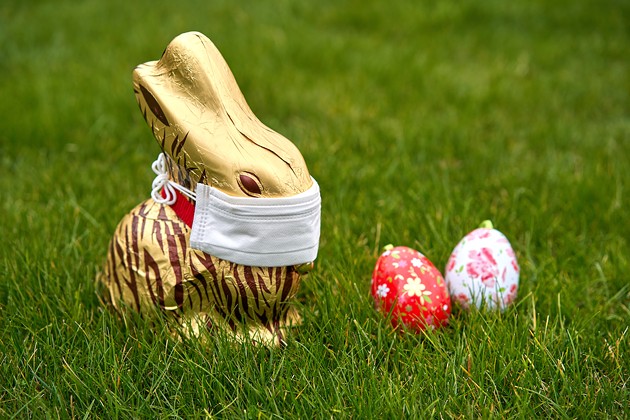 ADOBE STOCK
"The Easter Bunny should be your only visitor this weekend," says premier McNeil.
Key points as of the latest provincial news update:

Our death toll is rising

Nova Scotia’s second death from COVID-19 was announced at Thursday’s news briefing, in Halifax. The patient was a woman in her 90s. She died at Cape Breton Regional Hospital.

The first patient who died was also at Cape Breton Regional, but chief medical officer of health Robert Strang said the cases aren’t related. "These individuals were in different parts of the community. They were both admitted to hospital on the same day," he said. "Other than that coincidence, there's no connection between the two."

At the briefing the day before, Strang called that first death "a fairly unusual situation" because that patient, a 70-something woman, initially tested negative for the coronavirus. She was admitted to a non-COVID unit at the hospital until her symptoms changed and a second test came back positive, resulting in unwitting exposure—and thus self-isolation—for staff and other patients.

How many more Nova Scotians are going to have to die before people understand this is a deadly virus?


That case led to a change in procedures, Strang said: "There’s been a directive in the health authority that anybody that has suggestions of respiratory illness, that COVID precautions need to be maintained around that individual even if an initial test may come back negative."
click to enlarge

The Coast
The coronavirus in NS.
Another change this week means more people will be eligible for testing. It used to be you’d call 811 for assessment if you had a fever or new cough. But because community spread of the disease is happening, the province wants people with a sore throat, runny nose or headache to call 811, too.

Predicting the COVID caseload through models is a hot topic. Canada’s federal government released a modelling document Thursday, Alberta and Saskatchewan put models out Wednesday, Newfoundland and Labrador has a model that projects the next two years of the pandemic, which says best-case strict social distancing holds off the infection peak until November, although intensive care beds get overwhelmed in June.

Nova Scotia’s model is still not ready, and two different reporters pushed Strang about it at the Thursday briefing. He repeated what he’s said at earlier briefings, that a lot of factors including demographics, testing strategy and disease projections need to be accounted for to make a useful model, and it takes a lot of resources to do such "technical, sophisticated" work.

"Smaller provinces have limited capacity to do this work," Strang said. "We are working at it within the ability that we have and believe me, we have been pushing the people doing this work quite hard this week. But they're doing the best they can within the given capacity and we will bring forward that model when we're able to."

Even without a model to point to, Strang talked about the likely course of the pandemic and the eventual loosening of public health restrictions. As with other diseases that humans had no built-in immunity to, there may be waves of COVID-19 infection, and accompanying waves of stricter limitations on movements and socializing. The current first wave will likely extend into June, then some measures can possibly be eased. "People should expect that even the summer is going to look somewhat different than most summers," said Strang.

"We can fully expect a second wave, perhaps in the fall, and maybe even a third wave in 2021," Strang continued. "The overall message is that there is no short-term solution here, that this is likely to be something that waxes and wanes over the next 12 to 18 months. Therefore, our restrictions are going to be tightened and loosened perhaps several times over the coming months. I know that perhaps it’s difficult to hear that. But that is the reality."

At another point in the briefing, Stephen McNeil suggested that future projections about cases and deaths aren’t as important as the basic actions the province has been advocating for weeks. "We can do all the modelling we want. Every province is doing modelling," the premier said. "What will determine it will be how its citizens respond to public health orders. Self isolate, wash your hands, separate six feet."

New Brunswick’s new model says its death toll could range from 5,600 people, if there were no public health restrictions in place, to as few as 550 deaths if restrictions are adhered to well.

Heading into the Easter holiday long weekend, Strang offered an inclusive message of hope, mentioning not just his Christian faith, but also pointing out that it’s currently Passover, and Ramadan is starting near the end of April. "I would encourage all Nova Scotians regardless of their faith or point of spiritual connection, to see that as challenging as the pandemic is for you, your family and your community, there is hope and we will recover," he said. "If we focus on caring, kindness, selflessness and building up community, we will get through this and maybe we will be better. We’ll be different, but maybe we can be better."

Although McNeil echoed Strang—"While there is darkness for us as a province, there's always much hope for us, too"—he also had some other weekend business to attend to. The province’s Small Business Impact Grant and the Worker Emergency Bridge Fund opened Friday at 8am. And to offer additional supports to people, McNeil said "we are launching an enhanced 211 service" Saturday at 9am, enabling people who are isolated and/or afraid to check in with the Red Cross. There’s also the business of Easter’s traditional hidden chocolates, which apparently will not be disrupted.

Calling out Costco for real this time

The Easter Bunny better not flash its fur around Costco. Earlier in the week, Strang and McNeil called attention to the big-box retailer, and it wasn’t the good kind of attention.

"I saw a picture from the Bayers Lake Costco yesterday, where large crowds of people outside the store were well within the six feet of one another," Strang said at Tuesday’s briefing. "Lining up in large numbers of people, cheek to cheek outside of a store, is not common sense. Is not responsible. I just I'm baffled when I see a picture like that."

Contrast to that social distancing line to this Costco line-up in Nova Scotia today — and not one mask My buddy from Halifax shared it while also not stopping there to shop pic.twitter.com/YFNxt2M2Ri

"We’re not in the business of calling companies out," said McNeil on Tuesday. "But today we have to. Not only are too many people showing up at stores unnecessarily, when they get there they are not physically distancing. Remember that six feet, two metres apart. All the science says it works. So for crying out loud, just do it."

But being baffled about shoppers’ behaviour over a photo on social media was a pretty weak way to call out Costco. McNeil took another shot at it Thursday, however, and did much better.

It started when a journalist phoned into the briefing with a question about a Costco worker who says the crowds are so bad, the worker fears for their health. McNeil’s answer focused on the shoppers, his voice rising with anger as he spoke.

"As long as Nova Scotians continue to act irresponsibly when it goes and stands in line in front of Costco, this pandemic’s going to continue to go on. What happens if there's a healthcare worker there? What happens if you're passing it on to a family that goes home and hands it off to their grandparents?" the premier said. "We just announced to a second Nova Scotia family today who lost a loved one due to this virus. How many more Nova Scotians are going to have to die before people understand this is a deadly virus?"

That journalist, John McPhee of the Chronicle Herald, followed up by asking if stores should be doing more to enforce the rules, rather than simply expecting the public to obey. And in giving credit to stores that have taken protective measure, McNeil sharpened his criticism of Costco.

"Sobeys, a Nova Scotia-grown company, has shields around its cashiers. We’re seeing Atlantic Superstore where there's people at the door and preventing people from going in. You look at the Nova Scotia Liquor Corporation, if you go in, there's a mark there, you're standing six feet away. There are many protocols in place. There are, though, those few who continue to avoid doing what is right to protect the customer," said McNeil.

"It is incumbent on Costco—it is incumbent on Costco as well as it is every Nova Scotian—to ensure that the people going into those facilities are safe. And we expect them to follow the public health rules of this province and do it in a manner which has been laid out in front of them. Otherwise, it's going to be in a position where we're going to be left to make some very, very hard decisions that will potentially impact individual businesses."

Now that’s a call out.

The premier and Strang are taking a break from their briefings until Monday, and we hope you have a break, too. Enjoy a safe, quiet, socially isolated long weekend, everybody.