A pair of sharp and sprightly comedies has more than a few things in common. 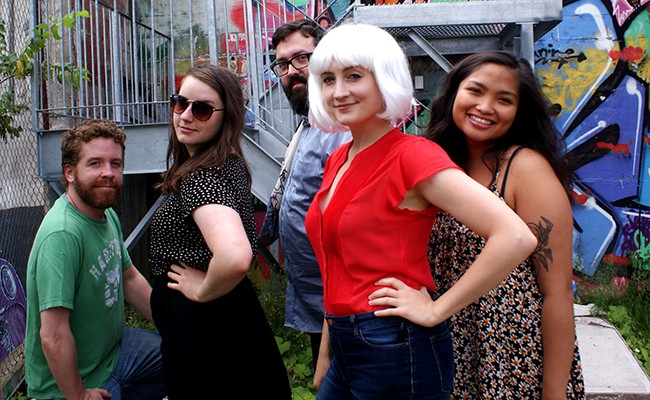 Kevin Hartford is having a busy Fringe: Oh Crap, My Scarf!, which he wrote and directed, and Herbie Dragons, which he co-wrote, have 13 performances between them across 11 days. Plus he's acting in the latter, having made his debut at Herbie's sold-out opening show. "I was surprised at how important knowing where to put my hands was," he says over a post-show beer on Labour Day, "so I just put them on my hips in a rather triumphant pose."

Oh Crap began as a lark that became real after last year's Fringe. "In my show I, The Greatest: The Dan Bray Story, there was a line said by Lesley Smith's character Ellen which was 'Oh crap, my scarf!' when she was imagining winding through the hills of Italy on the back of Dan Bray, and Garrett [Barker] was behind her. And that line struck a chord with many," says Hartford, a former Coast contributor. So he ported those characters—and reanimated them, as they'd been murdered—to a new story which sees them as a hapless couple who constantly cause (but never commit) murder.

Herbie Dragons is a Harry Potter riff he wrote with Bray, starring Melissa MacGougan and Kayla Gunn as sisters who can't get into wizard school. This one—a flurry of perfect timing, spot-on technical cues and sturdy writing that never wavers in its hour running time—is even more exceptional when you factor in that Bray, MacGougan and director Kathryn McCormack were all performing with Shakespeare By The Sea until September 2, three days after Fringe began. (Additionally: Gunn is in both shows, and Dragons' Colleen MacIsaac is starring in In SpAAAAAAce.)

"I have a printout in my bag that I consult," says Hartford. "I almost forgot this was happening today. And I work full-time, so that complicates things. I had to write it all down. Thankfully they're both in the same theatre, so we don't have to run to, say, The Waiting Room and back."