“A nice little sampler pack” of circus arts aims for the sky. 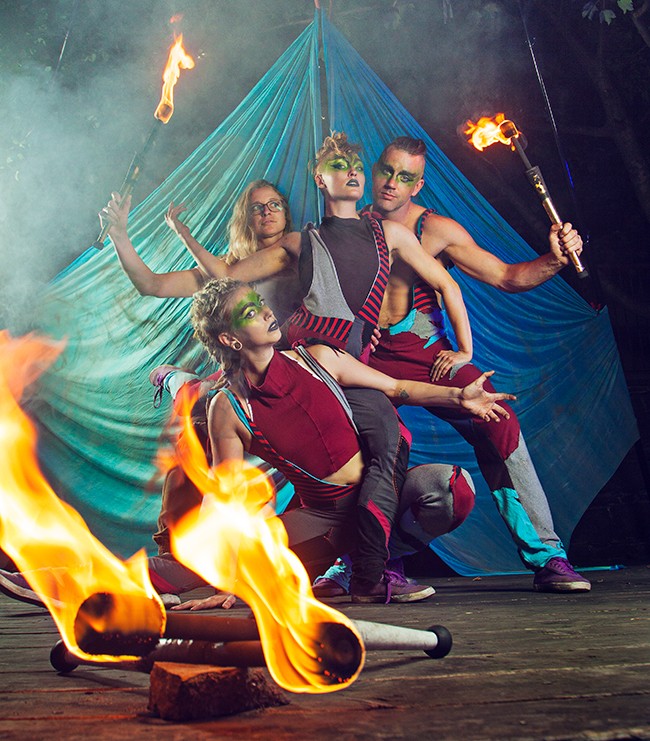 After the show, the performers from Liminal Flight are buzzing with energy. Maybe from the energy of the crowd, from having done incredible things with their bodies, or from a sense of accomplishment that comes with mounting a new performance.

"We wanted to challenge ourselves with this show," says co-creator Madelaine Higgins. "And it felt really good."

Liminal Flight is a new company made up of circus artists Higgins, Cait Anthony and Alex Smith, along with a cast of rotating guest performers. All circus professionals working in Halifax, the group came together to create a new performance that combines aerial arts, object manipulation, fire and dance. The results are an impressive combination of genres.

"It's not just an aerial show," says Higgins. "It's not just an acrobatics show, and it's not just a flow arts or fire show. It's a little bit of everything. Somebody who is new to circus will get a nice little sampler pack of all of the different little families that circus encapsulates."

Work on Liminal Flight began in February when Kara Friesen, a dancer and choreographer, was brought on board to push the artists out of their comfort zone into creating a fully realized, narrative, tour-ready show.

"It was such good practice because most of us work a lot on an improvisational basis," says Higgins.

The group devised a story to bring its various circus skills together, and the outcome is an Alice in Wonderland-esque narrative that toes the line between reality and imagination. A protagonist (alternating nightly between Taylor Zupiter, Brendan Tipney and Amanda Hobbs) bored with life's routines longs for something new, something magic. Enter Higgins, Anthony and Smith who deliver just that. It becomes a show about seeing newness in the everyday—and also a display of the tremendous skill of very strong people.

"We wanted to avoid a romance, or a fight against a bad guy," says Smith. "So creating a story with a conflict and no villain was a challenge."

When one thinks of Halifax exports, circus arts may not be at the top of the list, and those working in the scene would also agree that is a young industry, relatively speaking, and new works by troupes like Liminal Flight are an important part of growing that industry. Where the working norm might be to hire a line-up of artists and have them perform individually in a cabaret style, a less improvised narrative-based show allows opportunity for touring and showcasing local talent outside of the region.

The artists are quick to acknowledge—maybe even boast a little—that all of the production elements for Liminal Flight came from the east coast. The music was composed by local musicians (Justin Pants, Shane Martin and Spacefood AKA Aaron Klingbeil), the costumes made by a local designer (Laura May of Disasterpiece Apparel) and all of the performers and collaborators call Halifax home. A sense of local pride shines through as the artists talk about their creation.

"But if you're coming for the oohs and ahs and ta-daas," Smith makes sure to add, "we can't help ourselves but sneak a couple of those in there."